Please ensure Javascript is enabled for purposes of website accessibility
Log In Help Join The Motley Fool
Free Article Join Over 1 Million Premium Members And Get More In-Depth Stock Guidance and Research
By Matthew DiLallo - Sep 28, 2015 at 10:08AM

Halcon Resources Corp is making progress, but still has a lot of debt to deal with.

It wasn't all that long ago that Halcon Resources Corp (HK) was one of the darlings of the shale boom. Led by one of the early shale gas pioneers, Floyd Wilson, the company was poised to do the same thing with oil that Wilson did with gas. That meant quickly building a leading position and then unloading it for billions to the highest bidder. However, this time around his plan didn't work. Now Wilson and his team have a long road ahead of them with one very big obstacle standing in their way.

Stunning growth
Since taking over the company that's now Halcon Resources in 2012, Floyd Wilson created one of the fastest growing shale drillers in the country. As the slide below shows, he was able to boost production by 180% in just a few short years. 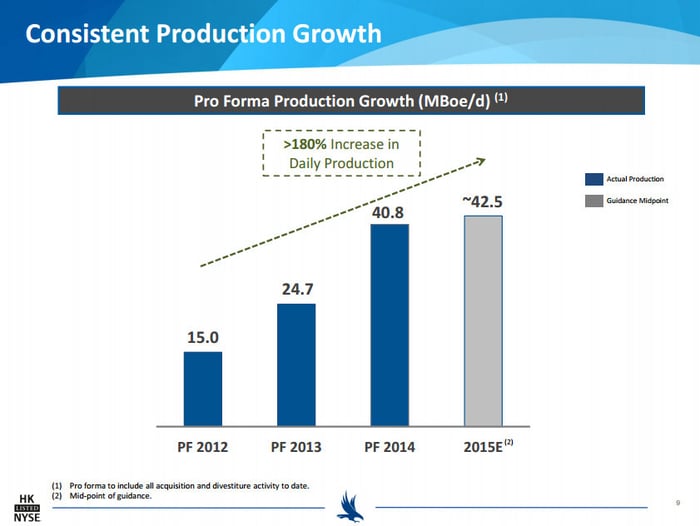 However, that stunning rise in production was largely fueled by debt. As this next chart shows, Halcon's debt level rose nearly lock-step with its production. 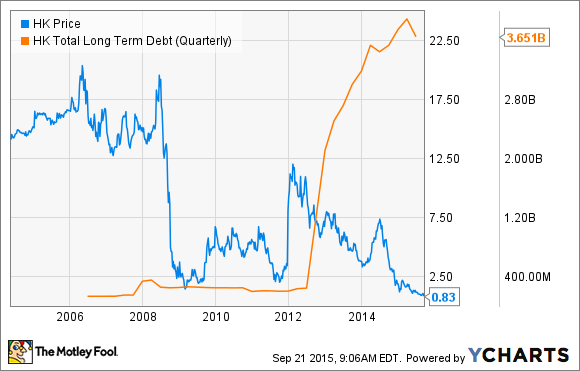 A mountain still to climb
As the debt chart noted, the company has made some progress on its debt over the past year. However, it still has a lot of debt left. Here's a look at its current debt situation:

So far this year the company has reduced its debt from roughly $3.9 billion to just over $3 billion. Clearly, that's a lot of progress in such a short amount of time. However, $3 billion is a lot of money for a company that needs to continue to spend hundreds of millions of dollars each year simply to tread water.

This is due to the fact that shale production declines very rapidly. That forces the company to invest a lot of money to keep production flat, with more needing to be spent to grow production. In other words, a lot of the debt it took on over the past few years was to drill wells that are no longer producing anywhere near what they were when the came online. In fact, at Halcon's current rate of production, decline rate, and well economics it costs the company roughly $325 million per year just to keep its production flat. The company estimates that it has the liquidity and cash flow to last it through 2018, though that's debatable.

That being said, flat production simply isn't going to cut it. Halcon Resources still needs to grow its production, and its cash flow, so that it can do more than just tread water, especially when it still has $3 billion in debt that's due in the early years of the next decade. That's something that isn't yet possible with oil in the mid-$40s. In other words, Halcon Resources still can't grow into its balance sheet, which means it will need to find even more solutions to reduce its debt as its still at an unsustainable level.

Investor takeaway
Halcon Resources is making progress on its debt, but the company still has a lot of it to work off. The problem, is that it won't be able to pare much debt by internally generated cash flow as most of that will go to simply keeping production flat. That leaves the company with fewer options as it looks to tackle what remains a large mountain of debt that needs to be addressed.