Please ensure Javascript is enabled for purposes of website accessibility
Log In Help Join The Motley Fool
Free Article Join Over 1 Million Premium Members And Get More In-Depth Stock Guidance and Research
By Ted Cooper - Sep 28, 2015 at 7:40AM

Keurig faces an uphill battle as brewer sales fall off a cliff. Can Keurig 2.0 and Keurig Kold return the stock to its previous high?

Once a stock market darling, Keurig Green Mountain (GMCR.DL) shares have fallen off a cliff following disappointing results in the first half of the year. Shrinking pod revenue and collapsing brewer sales caused investors to reconsider Keurig's growth prospects; the stock is off over 50% so far this year.

Keurig's future growth and profitability rest on its ability to maintain a competitive advantage in the marketplace. To do so, it must get consumers to adopt the next generation of Keurig Hot brewers, which only accept its patented pods. The company would also benefit from strong sales of its upcoming cold beverage dispenser -- Keurig Kold -- due out later this fall. If Keurig is unable to achieve high sales of these new brewers, the stock may not recover for some time.

Reclosing the system
Keurig rose to prominence on the back of its Keurig Hot brewing system, which reached 13% U.S. household penetration in fiscal 2013. The brewer franchise created enormous shareholder value because consumers could only use Keurig's patented K-Cups with the system, giving the company a competitive advantage in pod sales. Pods account for roughly 75% of overall sales, making them crucial to Keurig's business.

However, Keurig's K-Cup patent expired in 2012, affording any company the right to sell pods that are compatible with Keurig's original brewers. This is a major problem because Keurig's profits come mainly from pod sales, not brewer sales.

Keurig's second generation of brewers is designed to reclose the system by only accepting the company's newly patented pod design. While this strategy makes Keurig and its licensees the exclusive pod sellers for the system -- and should therefore shore up pod pricing -- Keurig is having a hard time convincing customers to upgrade to the new system (and ways to get around the system and use off-brand pods have been circulating on the Internet for months). Brewer unit sales declined 18% in the fiscal third quarter following a 22% second-quarter decline.

Keurig CEO Brian Kelley remarked on a recent conference call, "[O]ur transition to [Keurig] 2.0 was particularly complex. Point of sale results were not as strong as anticipated."

It turns out that consumers don't like it when their choices are narrowed. In particular, many Keurig fans were upset that "My K-Cup" packs were not compatible with the new machine. My K-Cups are nondisposable pods that users fill with their own ground coffee. In response to consumer backlash, Keurig has since introduced the My K-Cup accessory for second-generation brewers.

In addition, a competing coffee pod manufacturer is giving away a device that tricks Keurig 2.0 brewers into thinking off-patent K-Cups are compatible with the machine. This diminishes the value of Keurig's new pod patent since consumers can use old and unlicensed pods with the new machines.

Taken together, consumers' ability to brew their own coffee grounds and use almost any coffee pod in second-generation brewers will likely create downward pressure on K-Cup pricing. Name-brand coffee manufacturers can use the threat of going to a different pod manufacturer to win better licensing terms with Keurig. Thus, it seems unlikely that Keurig 2.0 will restore the company's profitability.

Don't bet on Kold
Even as its hot beverage business erodes, Keurig still has hope in its upcoming cold beverage dispenser, due out any week now. Keurig has already licensed many of the biggest soft-drink brands in what could be an even bigger hit than Keurig Hot brewers since the U.S. cold beverage market is estimated to be five times the size of the hot beverage market. 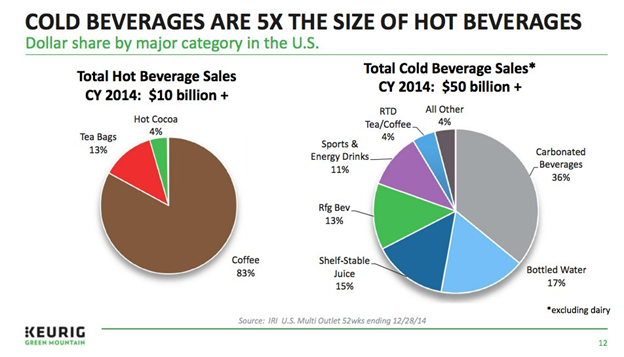 However, investors should temper their expectations with a cold dose of reality. At-home cold beverage leader SodaStream International earned just $44 million in its most profitable year ever. Even if Keurig were to match SodaStream's $44 million in profits in the first year that Kold is on the market, it would add just $0.28 per share to the bottom line.

In reality, it could take many years for Kold to match SodaStream's market penetration. Although Kold offers name brands that could accelerate its adoption -- and Kold's product economics could be better than SodaStream's -- it is probably imprudent to assume it will immediately generate higher earnings than the established leader in the U.S. market. As a result, Kold's introduction is unlikely to be the catalyst that reignites Keurig's growth. Investors may want to steer clear of Keurig shares until the company shows it can beat expectations.