Please ensure Javascript is enabled for purposes of website accessibility
Log In Help Join The Motley Fool
Free Article Join Over 1 Million Premium Members And Get More In-Depth Stock Guidance and Research
By Daniel B. Kline - Sep 29, 2015 at 5:03PM

The company is launching new phones, Chromecast improvements, and some surprises.

Google (GOOG -3.69%) (GOOGL -3.93%) media events where the company launches new hardware don't create the frenzy that the ones held by some of its tech rivals do.

Perhaps that's because the search giant has faltered so often with its tech devices. Nexus phones have never become a thing on any major level and the company's tablets have underwhelmed. Still, Chromebooks have built some market share -- specifically in the education space -- and Chromecast was ahead of its time.

The company was expected to refresh a number of those product lines as well as introduce some new items during its Sept. 29 event, which was also notable because it's the first led by Sundar Pichai in his new role as CEO.

The new boss kicked things off by explaining that the day would be about products and specifically computing. He also shared a little bit of how he views the company's role in developing new devices.

"The way we do it, by investing in large, open ecosystems, platforms which we build with everyone," he said. "The scale at which everything is working is pretty breathtaking to see."

He noted that there are 14 billion active Android devices and that the next range of products is about bringing the next billion users online. Pichai also mentioned the company's momentum in developing markets and its success with Chromebooks in the United States before he turned his attention to the stars of the show -- Google's new product lineup.

Made by Huawei, the handset has a full-metal body made from anodized aluminum. It's 7.3mm thick with a 5.7-inch display. "It has beautiful diamond-cut edges and a sculpted back that make it feel really comfortable," Burke said. It comes in three colors frost white, aluminum, and graphite.

Burke also said that it has a USB Type-C port that lets it charge "almost twice as fast as an iPhone 6 Plus." It also has what he called the best camera ever on a Nexus device -- a 12.3 megapixel model and a 5MP front-facing model. He showed an example of how the 6P shoots better pictures than the iPhone 6s and the original Nexus 6.

The camera can shoot 4K video and it can shoot bursts of photos. Google has also added the ability to double-tap the start button to launch the camera.

The 5X, which like the 6P runs the latest version of Android, Marshmallow, offers a 5.2-inch display and it also has USB Type-C. Burke called it "affordable" and said it had a bigger battery than the model it replaces. It's made by LG and it has a six-pixel camera optimized for indoor shooting. The phone comes in carbon black, sports white, and ice blue.

Both phones also offer something called Android Sensor Hub, a secondary processor that does things like track when the phone is picked up. It also can track running and other exercise without taxing the main processor or burning through battery power.

The 5X starts at $379 and the 6P at $499. Both ship "later in October." Both phones work with Project Fi, Google's wireless MVNO network.

Chromecast changes are coming
Google's streaming video stick was novel when the company first released it. The device's $35 price point was well below the going rate for set-top boxes at the time and it being controlled by smartphones rather a remote control was at least interesting. Now multiple players offer stick devices which are arguably superior to Chromecast at a similar price point, making updates to the device well overdue. 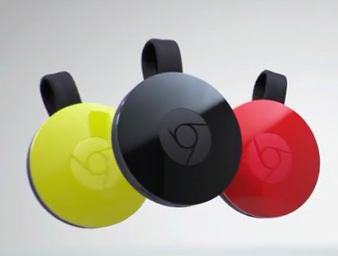 The company did not disappoint and introduced two new Chromecast devices.The first offered a new design that the company said "is easier to plug into TVs with crowded ports," in a blog post released after the event. The cute, little device offers a built-in, flexible HDMI cord and it "supports the latest Wi-Fi standards and adapts more easily to changing Wi-Fi conditions in your home, so you get higher quality video with less buffering," according to the company.

Next up was a bit of a surprise, a new product called the Chromecast audio, a small device that plugs into your existing speakers, "so you can stream your favorite music, radio and podcasts over Wi-Fi, similar to Chromecast." It works with a number of apps including Spotify, Pandora, and  Google Play Music.

Both devices cost the same $35 that the original Chromecast has been sold for since its July 2013 launch.

Saving the best for last?
Google closed the show with the Pixel C tablet. In his introduction Pichai had said that the Pixel products were about showing what was possible with Android to sort of raise the bar for the company's partners.

The first Android tablet built entirely by Google, the Pixel C is a hybrid which offers a full-size keyboard. The keyboard attaches to the tablet magnetically without a visible docking mechanism. It has a similar aluminum body to the Chromebook Pixel as well as a USB Type-C port.

Clearly the keyboard is designed to be the killer feature for the tablet and Product Management Director Andrew Bowers talked about it while pretty openly dissing the competition.

"Tablets are great for games, TV, or watching movies, but they also force you back to a laptop when you want to write a document or respond to a long email," Bowers said. "And while there are plenty of keyboard accessories, they are just that, they're accessories. You have to use them on a desk or they get in the way when you don't want to type."

Bowers said the company stepped back and attempted to engineer a new keyboard solution. "We asked ourselves what would the ultimate touch plus typing experience be, something where the screen and the keyboard come together to make a whole that's better than the sum of its parts," he said. The screen is adjustable and it locks into position without a kickstand.

Pixel C has a 10.2-inch screen. The keyboard, which connects via Bluetooth, has a small battery, but it charges by connecting to the tablet and lasts as much as two months without a charge. It has a Nvidia X1 processor with a Maxwell GPU along with 3 GB of RAM.

The device will be available "in time for the holidays" with the tablet starting at $499 and the keyboard costing an additional $149.