Please ensure Javascript is enabled for purposes of website accessibility
Log In Help Join The Motley Fool
Free Article Join Over 1 Million Premium Members And Get More In-Depth Stock Guidance and Research
By Matthew DiLallo - Sep 30, 2015 at 11:15AM

Brookfield Infrastructure Partners L.P. (BIP 0.58%) is a pretty compelling income stock as it's currently yielding 5.7%. However, as tempting as that yield is, it's no good if it's not safe. That's why I've developed a list of characteristics that one would find in a hypothetical perfect master limited partnership, which goes a long way to ensure the long-term stability of that high yield. Here's how Brookfield Infrastructure Partners stacks up.

This is an area of strength for Brookfield as 90% of its cash flow is either regulated or contracted. Moreover, 70% is indexed to inflation and 60% has no volume risk. In other words, the company has a very solid foundation of stable cash flow that supports its generous distribution.

2. A solid balance sheet
Another key factor in an MLP's ability to continue paying its distribution is having a solid balance sheet. Ideally, we're looking for an investment grade credit rating and/or a debt-to-EBITDA ratio of 4.0 times or less.

Here, Brookfield is borderline as it does have a solid investment grade credit rating of BBB+. However, its debt-to-EBITDA ratio is 5.5 times, which is a bit high. That being said, the company is comfortable with that leverage ratio largely because it is mainly at the asset level and not the corporate level as just 9% of its debt is corporate debt. Furthermore, given the fact that the majority of its cash flow is regulated or contracted, it is more comfortable with a higher leverage ratio as it's not worried about its cash flow dropping.

This is an area where Brookfield really shines as the company only pays out 67% of its cash flow in distributions. That works out to a very robust 1.7 times coverage ratio. 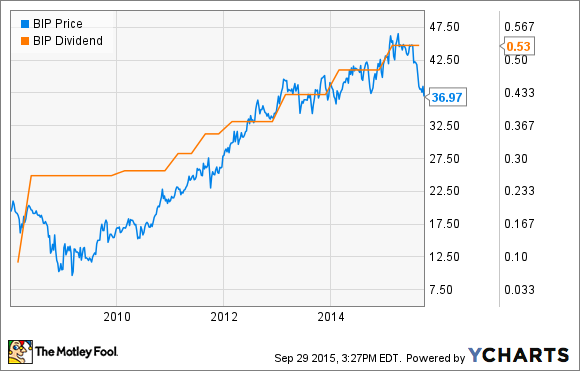 5. A visible growth project backlog
We'd also like to see signs on the horizon that the company can keep that growth coming. Ideally, this would come by way of a strong organic project backlog. That's something that Brookfield Infrastructure has -- its total project backlog currently stands at $1.3 billion. That growth is fairly well balanced as the company expects to commission half a billion dollars in utility projects over the next two years with another $650 million being spent over the next two to three years on transportation projects across its portfolio.

In addition to organic growth, Brookfield also expects to derive incremental growth by continuing to be active in acquiring infrastructure assets. As the slide below notes, the company expects that 20% of its long-term cash flow growth will come from new investments. 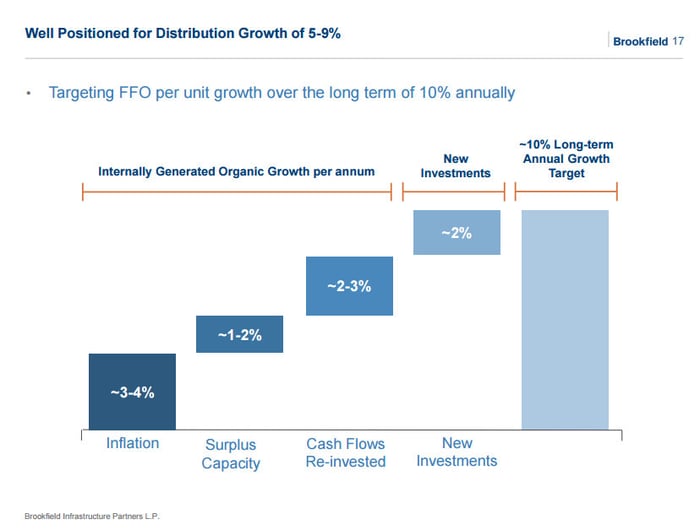 The company currently has a number of deals in its pipeline that it expects to close over the next year or so, including its participation in a very large acquisition of an Australia port and rail company. In addition, it sees a robust opportunity set beyond its previously announced deals as it expects governments and businesses to be active sellers of infrastructure assets in order to reduce their leverage.

Investor takeaway
When we add everything up, Brookfield Infrastructure Partners really is a shining example of what a perfect MLP would look like. While its leverage ratio is a bit on the higher side, most of its leverage is on the asset level, which helps to insulate the company. Meanwhile, its cash flow is largely covered by stable assets, its payout ratio is low, and it has very visible growth. Suffice it to say, this is a company that income investors should have on their radar.