Please ensure Javascript is enabled for purposes of website accessibility
Log In Help Join The Motley Fool
Free Article Join Over 1 Million Premium Members And Get More In-Depth Stock Guidance and Research
By Daniel Miller - Sep 30, 2015 at 11:00AM

Here are a look at recent factors that suggest Caterpillar's business is still trending down.

When it rains, it pours, and longtime Caterpillar (CAT 1.76%) investors surely feel like they've been in a flood hazard during the past couple of years. In addition to the mining weakness witnessed during the past few years, the recent slump in oil prices has sent retail sales of its Energy & Transportation business segment lower since spring.

But just how bad are things at Caterpillar? According to one recent analyst downgrade: really bad.

Business segments at a glance
To put some context around Caterpillar's dismal sales, it's important to look at a trend during the past year-and-a-half. This time last year, Caterpillar's Energy & Transportation sales were about to kick off half a year of improvement -- but that has quickly reversed, thanks, in part, to the slump in oil prices. 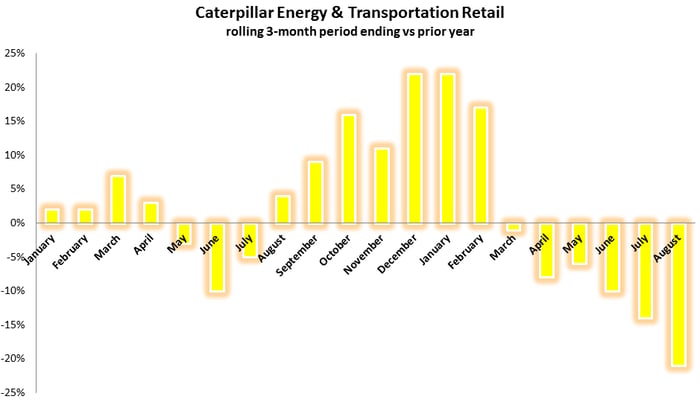 Those aren't the only two business segments struggling to generate sales for Caterpillar's products. Caterpillar's construction industries' retail sales have continued to check in with steep declines.

Those are sales trends that no Caterpillar investor wants to see, but things don't appear to be getting better anytime soon. When speaking about Caterpillar's risk heading into 2016, Axiom Capital's Gordon Johnson noted this:

That is, despite non-GAAP EPS remaining resilient, after our scrub of the financials, as well as roughly $9 billion of failed acquisitions in the past four years (one of which was later rendered a fraud), 2 business segments that we believe are in a state of structural decline, and one that appears to be rolling over at present, we see forward EPS revision risk as high.

Another problem Caterpillar and its investors face is the strong dollar, which is enabling foreign rivals, such as leading competitor Komatsu, to be more aggressive with pricing. If Komatsu opts for aggressive pricing, it could certainly pressure Caterpillar's market share and margins, which would only pile onto the company's current issues.

To bring Caterpillar's pain full circle, the company is also looking unfavorable in the media, as it has to slash as many as 10,000 jobs, roughly 9% of its workforce, through 2018. Caterpillar also reduced its 2015 revenue guidance by $1 billion, and said it anticipates sales to decline by 5% in 2016.

Is it time to buy low?
There have been many arguments made that Caterpillar is a cyclical stock, and that buying right now will prove a good move when business rebounds, because, after all, Caterpillar isn't going to disappear entirely. However, that argument doesn't take into account that the rebound, if and when it occurs, could be more than two to three years away, and even then it could be a very slow rebound.

The simple truth is that business is very tough for Caterpillar around the globe, and that investors looking for a value investment are likely better off in different long-term investments for the time being.