What: Shares of Radware (NASDAQ:RDWR), a provider of application delivery and security solutions, slumped on Tuesday after the company issued disappointing preliminary results for the third quarter. The stock dropped as much as 27% early in the day and was down nearly 21% at 1:30 p.m.

This news comes a few months after Radware missed analyst estimates for its second quarter and provided the above guidance. At the time, Radware's guidance was below analyst expectations, and the stock tumbled as a result. The stock is now down about 45% from its 52-week high. 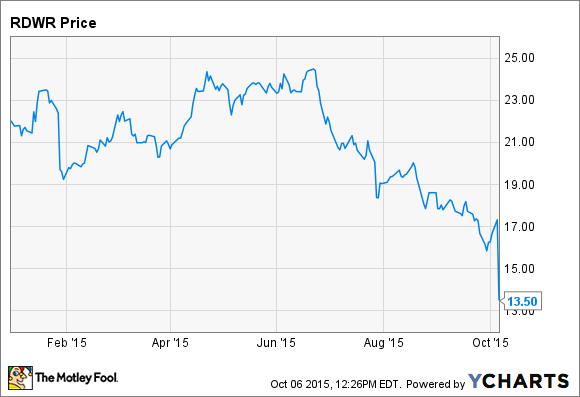 Now what: Radware's disappointing preliminary results have prompted an analyst downgrade from Oppenheimer, who believes that execution issues in the company's service provider business is to blame. According to the analyst, service providers account for roughly 30% of Radware's revenue.

Sales to service providers can be volatile, which makes producing steady revenue and profits difficult. Radware's earnings have fluctuated in the past few years, dropping considerably in 2013 following a record year in 2012, so the company's poor results may just be a temporary issue. Investors aren't buying it, though, and the stock is being severely punished as a result.

Why Shares of Radware Ltd. Slumped More Than 20% on Tuesday @themotleyfool #stocks $RDWR Next Article
Current