What: System-on-chip equipment maker Sigma Designs' (NASDAQ:SIGM) stock sank 30% lower during the month of September, according to S&P Capital IQ data. The plunge has added to a wild ride for shareholders lately. The stock is now in the red for 2015 after having risen by as much as 61% from January through June. 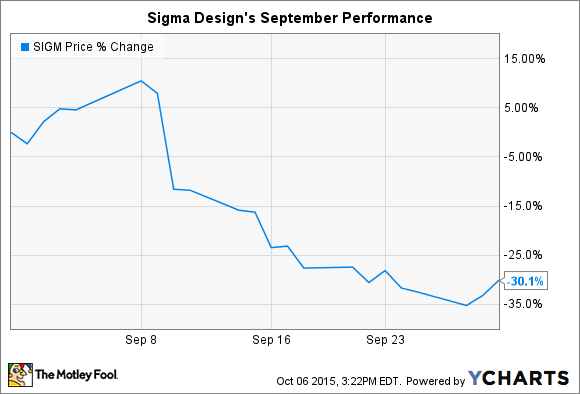 Volatility has frequently pinched investors in this small company. Shares are up 71% in the last 52 weeks, but down 37% over the last five years.

So what: Ironically, September's plunge occurred after Sigma Designs released surprisingly strong second-quarter earnings results. Sales jumped 35% higher to reach $58 million as profits improved to $4.5 million, or $0.12 per share, from $3.2 million, or $0.09 per share, a year ago. By comparison, analysts were expecting Sigma to post $56 million of revenue and $0.06 in earnings.

Investors decided to sell off the stock despite those impressive headline results: Shares fell more than 15% during the trading day immediately following the report. The earnings announcement included two pieces of worrying news for the business. Profitability fell significantly, for one, dropping to 50.5% from 53.8%. CEO Thinh Tran and his executive team blamed rising SmartTV systems sales for the dip since they currently carry a lower profit margin than other products in the portfolio. The company also forecast slowing sales growth for the current quarter.

Now what: Those profit margins should continue to slip as Sigma Designs ramps up the production of its SmartTV systems before driving the production costs lower. In fact, management forecast profitability falling to as low as 48% of sales in the third quarter.

At the same time, the company sees slow sales growth ahead. Revenue should rise by just 11% in the third quarter -- compared to 35% growth in the prior quarter. That kind of lumpiness is to be expected for a company of this size, especially considering that its largest business segment is driven by highly seasonal TV sales.

As Sigma Designs' revenue growth and profitability figures swing wildly, shareholders can expect continued volatility in the stock as investors try to figure out where these important numbers will settle over the long term.