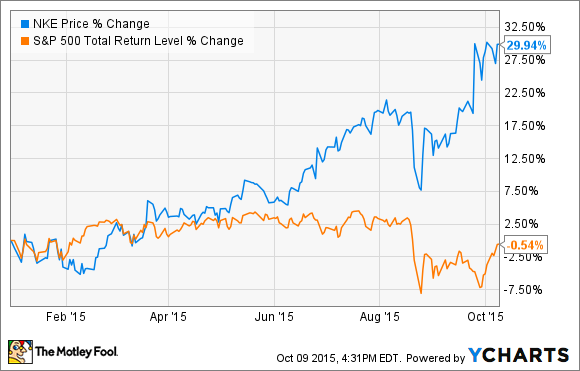 So what: Nike's quarterly revenue may have climbed a modest 5.4% year over year, to $8.4 billion, but that easily outpaced estimates for $8.2 billion. Keeping in mind that 52% of NIKE Brand sales were generated in international markets during the quarter, top-line growth would have been much more impressive at 14% had it not been for the negative effect of currency exchange. Nike enjoyed broad strength in all geographies on a currency-neutral basis, including 9% growth in North American sales, 14% in Western Europe, 26% in Central and Eastern Europe, 30% in Greater China, 35% in Japan, and 19% in "emerging markets" (notably including Mexico and Brazil).

On the bottom line, Nike achieved 23% growth in net income, to $1.2 billion, or $1.34 per share, again beating estimates for $1.19 per share. For that, Nike investors can thank a combination of aggressive share repurchases -- including 5.5 million shares bought back for $588 million last quarter -- and a 90 basis-point improvement in gross margin, to 47.5%.

This is a product of Nike's ability to command higher average selling prices, while at the same time growing its high-margin direct-to-consumer business. It also helped that Nike's "demand creation" investments dropped 7% year over year in the quarter, as it was still investing heavily in the same year-ago period to sustain momentum that began with the 2014 FIFA World Cup.

Now what: Looking forward, Nike also revealed worldwide futures orders rose 9%, or 17% on a currency-neutral basis, indicating healthy demand for Nike's wares in the coming quarter. And while Nike CFO Andy Campion stated that this demand, combined with Nike's strong quarter, was "only" enough to "slightly improve" Nike's full-year outlook, it's hard to blame the market for celebrating this solid start to Nike's new fiscal year. Even with shares trading around 31 times trailing 12-month earnings, and within reach of fresh all-time highs, I think investors are perfectly justified paying such a premium for this world-class company.