Image by PeteLinforth via Pixabay

I (Brian Feroldi here!) always find it hard to hit the sell button on any stock, as it's nearly impossible to know if you are making the right decision at the time. It can be particularly difficult to part ways with a stock that has lost you money, as locking in a loss always feels like you are admitting defeat, which is always tough to do. However, sometimes the facts change and it can be a smart decision to let go of a loser so you can put your money into a better name. Given the recent sell-off of biotech stocks, now might be a good time to reallocate those funds elsewhere.

We asked our team of Motley Fool healthcare contributors to pick a biotech stock that they think it's time to cash your chips in on. Read below to see their sell recommendations!

George Budwell: Bellicum Pharmaceuticals (NASDAQ:BLCM) is a clinical-stage biopharma working on novel cell based therapies for cancer and rare blood disorders. When I originally bought this small-cap stock earlier this year, my thinking was that its compelling molecular switching device, designed to provide better efficacy and safety controls than current modified T-cell therapies, would put the company in the catbird seat. Unfortunately, Bellicum's share price has now dropped by nearly 40% since my initial purchase.

The good news is that nothing has gone terribly wrong regarding the company's clinical program. Rather, this marked decline appears to stem from the rapid clinical progress by some of its closest competitors in the area of next-generation CAR-T development, as well as the general sell-off among small-cap biotechs over the last few months.

Having said that, I am now leaning toward cutting my losses with Bellicum, given that a major clinical update may not be forthcoming until next year's American Society of Clinical Oncology meeting that's still roughly 8 months away at this point. My primary concern is that the market's extreme pessimism toward developmental-stage biopharmas may linger for a good while longer, and without a positive catalyst to help turn the tide, Bellicum's stock will probably continue to head lower in lock-step with its peers.

Todd Campbell: To say that Sarepta Therapeutics (NASDAQ:SRPT) shares are volatile may be an understatement.

Optimism for an accelerated FDA review of its Duchenne's muscular dystrophy drug led to Sarepta's shares hitting $40 in the summer of 2014; however, worries that the FDA wouldn't review it quickly caused shares to plummet to $10 by early 2015. Earlier this year, news that the FDA was reconsidering helped propel shares all the way back to $40, but recently, they've slipped back to $28.

Disneyworld doesn't have anything that compares to that kind of roller coaster ride, and for that reason I think it makes sense to get this one out of portfolios.

Owning highly volatile stocks like this one can cause emotional buying and selling that can imperil portfolios. Given that the FDA is expected to make a decision on Sarepta's drug in February, it's unlikely that its volatility is going away anytime soon -- especially since other companies, including the well-heeled and experienced BioMarin, are also angling for market share in this indication. BioMarin is expected to get its FDA decision in December, two months before Sarepta, and if the FDA gives it a green light, then it could mean that peak sales for Sarepta's drug -- if approved -- could be less than some think.

Brian Feroldi: Many of the companies selling promising obesity treatments like Arena Pharmaceuticals, Orexigen Therapeutics (NASDAQ: OREX), and Vivus have been bloodied over the years, and all are currently trading for under $5 per share. Cutting ties with a loser is never fun, especially one that has lost its early investors a lot of money, but if I was a shareholder of Orexigen Therapeutics I think I'd be looking for an exit right now. 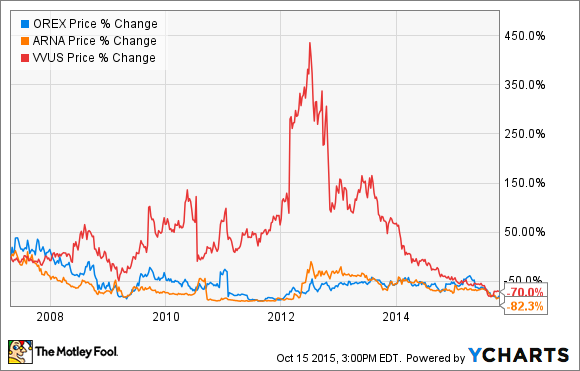 A slip up earlier this year has put Orexigen on the hook to finance a clinical trial that has been mandated by the U.S. Food and Drug Administration for its flagship weight loss pill Contrave. Originally, Orexigen and its marketing partner Takeda Pharmaceuticals were going to split the cost of safety trials, but since Orexigen was the cause of the problem Takeda rightly wants it to pay for the whole thing. Given that the trial may cost up to $210 million, this development is a big deal for Orexigen's shareholders.

In addition, Orexigen has been slow to launch its drug in Europe, despite having approval, as it's had a tough time finding a marketing partner in the space, which is perhaps no surprise given its strained relationship with Takeda.

Its not that Orexigen can't get beyond these problems given enough time, as it certainly could do just that and work out well for investors, but given the spotty history here I think investors would be better off selling this loser and putting their money in a higher quality name.