Please ensure Javascript is enabled for purposes of website accessibility
Log In Help Join The Motley Fool
Free Article Join Over 1 Million Premium Members And Get More In-Depth Stock Guidance and Research
By Evan Niu, CFA - Oct 20, 2015 at 10:00AM

Apple Car may be years away, but it's already killed a company.

Even though Apple's (AAPL 1.62%) rumored electric car is many years away from launching (assuming it does at all), that doesn't mean it can't already start taking companies down. More specifically, we're talking about Mission Motors, a small start-up located in the Bay Area that was developing a fully electric motorcycle but continued to struggle financially, according to Reuters. Mission had made prototypes but never released a production model to consumers.

Apple has reportedly been very aggressive in poaching engineers from Mission over the past year to the extent that Mission had to halt operations a few months ago. Amidst Mission's foundering and attempted pivot to a different business model, Apple swooped in and offered key talent job stability alongside hefty pay raises. Hard to say no to that.

Farewell, Mission Motors -- we hardly knew thee
Even just taking a look on LinkedIn, it's apparent that Apple has grabbed at least a handful of engineers. This includes mechanical engineers and software and electrical engineers, among others. The Reuters report notes a handful of specific employees, such as Eyal Cohen. Cohen's LinkedIn profile shows that he transitioned from Mission to Apple in November 2014. 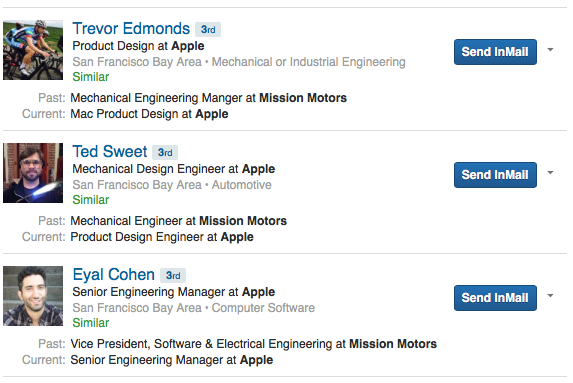 Apple continues to bulk up its auto talent in a big way, as the evidence mounts that Project Titan is proceeding full-steam ahead. Apple isn't the only one that has grabbed talent from Mission though. Tesla Motors (TSLA 1.24%) also has staff that used to call Mission home.

Of course, Apple and Tesla have been competing for engineering talent as well, and Apple's poaching from Tesla had even supposedly caused some development delays for the Model X.

Why not acqui-hire?
Reuters notes that Apple never tried to acquire Mission, which seems a bit peculiar. Even though Apple is probably focusing on developing a car instead of a motorcycle, Mission conceivably still has a lot of assets that would prove valuable for EV development, such as component designs, patents, and battery technology.

Mission was also very small (it had only raised $14 million in funding so far), so Apple presumably could have quietly scooped up the start-up without triggering any reporting requirements. On paper, it sounds like it would have been a no-brainer acqui-hire, but I'm sure that Apple has its reasons for merely poaching what it wants.

Two's company
It's a good time to be an auto engineer in Silicon Valley right now. Apple and Tesla are two of the highest-flying names, and both are on the hunt for top talent and are willing to pay for it (although one has a bit more money than the other).

Tesla's best defense against a potential Apple Car will likely be the Model 3 if the company can execute and hit the $35,000 price point. Since Apple would likely do as Apple does and position Apple Car at the premium end of the market, it would probably be more of a Model S challenger than a Model 3 challenger.