The S&P 500 (SNPINDEX:^GSPC) and the Dow Jones Industrial Average (DJINDICES:^DJI) both ended today's trading session firmly in the red: They lost 1% to kick off the new trading week: 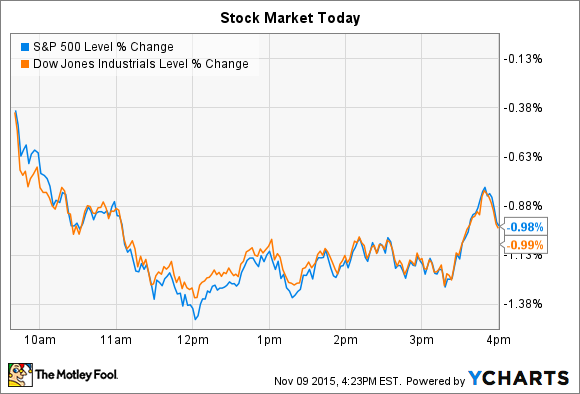 In economic news, the Organization for Economic Cooperation and Development (OECD) this morning released a report that described a "sharp downturn" in emerging market economies that is hurting global growth. The OECD projected a rebound starting next year, but also said that weaker growth, trade and investment trends, particularly in China, add uncertainty to that forecast .

Priceline's outlook disappoints
Priceline's 9% drop was enough to make it one of the worst performers in the S&P 500 today. Yet the stock remains up 15% in 2015 — and 230% higher over the last five years: 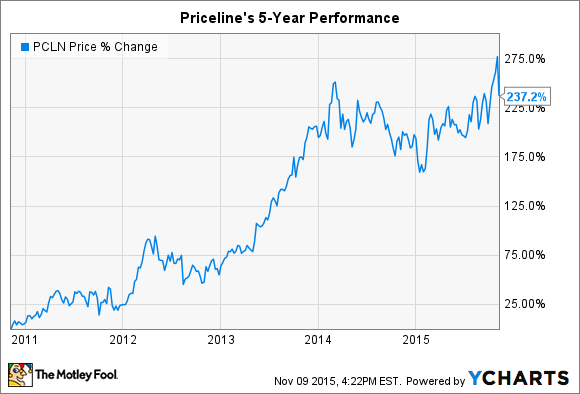 The reason behind today's pullback was a third-quarter earnings report that failed to live up to Wall Street's high expectations. But the headline numbers weren't disappointing at all: Priceline's 9% sales improvement and 13% earnings jump both beat consensus estimates. The online travel giant's 22% bookings growth even surpassed the high end of management's prior forecast (in August they projected gross bookings growth of between 13% and 20%). Meanwhile, profit increased at a higher rate than revenue growth, leading to a gross profit margin expansion from 92% of sales to 95% of sales .

But the stock still dropped due to fourth-quarter guidance that called for a decline in gross bookings of as much as 10% in the U.S. market. Management's revenue and profit forecasts were also below Wall Street consensus targets.

That soft outlook contrasts sharply with the one issued back in August, which included CEO Darren Huston predicting "the largest quarter in our company's history." Priceline executives aren't sounding the same optimistic tone about the coming quarter.

Disney works back toward a new high
Disney bucked the market downtrend today and instead inched back toward its all-time high of $121 per share. Shares have now almost completely recovered the 20% they lost in the weeks following Disney's August second-quarter release, when worries over a shrinking ESPN subscriber base spooked investors.

The stock continued rising today in the wake of last week's third-quarter earnings results that included a 35% spike in profits. And contrary to those worries, the ESPN business didn't show signs of weakness. In fact, its improving affiliate fees and advertising revenue helped Disney post 27% higher earnings at its media networks division. "Thanks to the largest array of sports properties in the industry and ESPN's well-earned reputation among sports fans for consistently over-delivering," Chief Operating Officer Thomas Staggs said in a conference call, "the brand is stronger than ever ."

Looking ahead, Disney is sitting on the deepest pipeline of new business opportunities in its history. The company's movie release calendar includes three Star Wars films between now and the end of 2017, along with likely hits from the Pixar, Marvel, Disney, and Disney Animation studios. Add in a consumer products division that's set to benefit from massive licensing sales tied to the Star Wars Episode VII release next month. And don't forget a new theme park ready to open in the most populous city in the most populous country in the world: Shanghai Disney.

Not all of those huge bets will pay off. And some, like the China resort, will take time before they become profitable. But that reality still leaves Disney shareholders with several potentially game-changing business initiatives to look forward to over the next five years.