There is something soothing and therapeutic about a company reaching the fourth-quarter of a difficult fiscal year and looking ahead to a better year. It's not quite that Emerson Electric's (NYSE: EMR) management is expecting a better fiscal 2016, but rather it expects the second half of its 2016 to mark an improvement on the first.Following the current rough patch, investors could be looking at an entirely different story by this time next year.Time to get excited? Let's dive in and see if there is any cause for optimism.

It will get tougher before it gets better

That's the message that CEO David Farr essentially gave investors in the fourth-quarter earnings presentations. As you can see in the chart below, the company started the year strongly, only to see conditions gradually worsen as the year progressed. Moreover, it's the two largest segments (Process Management and Industrial Automation) have seen the most startling declines -- a key point, because the company will be coming up against these difficult comparisons in its first two quarters of 2016. 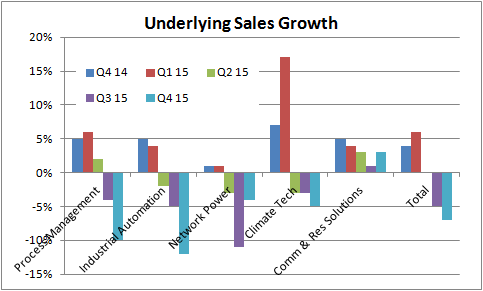 Underlying sales growth declined 7% in the fourth-quarter, and 15% on a reported basis. But if you think that's bad, just wait until you read what Farr said about the upcoming first-quarter.

In a nutshell, he noted the difficult comparison with the first-quarter of 2015 and guided toward "probably negative 10% underlying sales growth, with negative 7% currency and divestiture impact, with a lot of issues around that because of the price costs." In total, those numbers would produce a reported whopping sales decline of 17% compared to the first quarter of 2015,

He then outlined expectations for the the second-quarter, in "which I believe underlying sales could be down somewhere in the 5% to 6% range" -- a forecast that implies a lessening of the decline in underlying sales. However, the really interesting bit is where Farr implied that underlying sales growth could turn positive in the third-quarter.

"[W]e will have down five quarters. We will then have the restructuring kick in, really starting to improve our profitability as we get into the second and third and fourth quarters, then we'll start seeing the improvements of the global markets we serve."

Assumptions
There are three key reasons why Emerson Electric could see an improvement in the second-half of 2016.

I've discussed the first issue above. Turning to the restructuring benefits, it's worth noting that the company accelerated its restructuring activity in the fourth quarter, spending $128 million on restructuring -- some $40 million more than forecast in the third-quarter earnings presentation.

All told, the company spent a total of $221 million on restructuring in 2015 and plans to spend another $60 million to $70 million in 2016, with Farr suggesting that 70% of it the restructuring spending could be made in the first half -- something that would reduce profitability in the first two-quarters.

The good news is, according to the earnings release, there should be $250 million in cost savings generated by the restructuring in 2015 alone -- an impressive figure when compared to net sales of $22.3 billion in 2015.

Stability in end markets
The third consideration is the most contentious. To be fair, Farr isn't building much optimism into his forecasts. For example, in response to a question from Credit Suisse analyst Julian Mitchell on the earnings call, he outlined that he was assuming "the global environment is very similar" to current conditions -- implying that it would be natural for companies to start spending again based on current demand.

However, there is no guarantee that end-market conditions will stabilize in 2016. Or at least not in the kind of markets -- energy capital expenditures, emerging market spending, industrial automation, etc. -- that Emerson Electric has exposure to.

The takeaway
Ultimately, management is forecasting a full-year 2016 underlying sales decline of 2% to 5%, with reported sales expected to fall 6% to 8%. Operating margin is expected to be similar to this year's at around 17%, and the full-year EPS guidance range is $3.05 to $3.25 compared to this year's $3.17.

According to these forecasts, next year's EPS figure will be not dissimilar to this year's, but the difference is that earnings will could be on the upturn in the second half of next year--something that might cause the market to give the company just a little more credit.

Looking ahead, much depends on Emerson's end markets and the company achieving the targeted $250 million in cost savings from restructuring. The good news is Farr's assumption that the global economy in 2016 will be similar to current conditions seems reasonable, and Emerson Electric's track record of dealing with downturns suggest management knows how to cut costs in down markets.