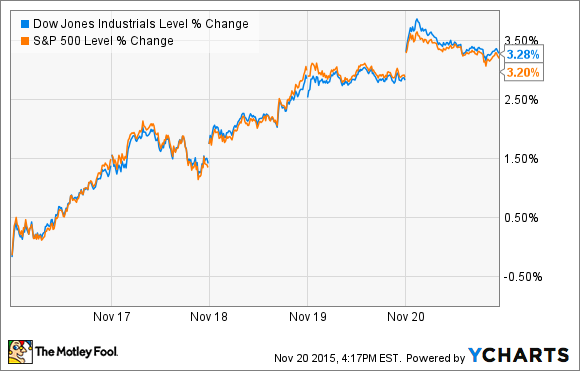 The Dow Jones Industrial Average (DJINDICES: ^DJI) and the S&P 500 (SNPINDEX: ^GSPC) respectfully traded 3.28% and 3.2% higher this week after the market got wind of some new economic data.

One piece of economic data that was of interest to investors came Tuesday when the consumer-price index, which essentially measures what Americans pay for a wide-range of products, rose a seasonally adjusted 0.2% which was right in line with economists' estimates. That increase came after two months of declines, according to the Labor Department, but the broader trend suggests underlying inflation remains historically weak.

Despite inflation being a bit of a non-issue lately, Federal Reserve officials are still likely to raise rates in December. The market has reacted positively to the news, as it signals the broader economy has strengthened in recent years.

Aside from economic data, it was an action packed week in the market with acquisitions, IPO's, and earnings reports – here are some highlights.

Square's (NYSE: SQ) shares jumped 45% during its initial public offering (IPO) after the company's management decided to lower its price. Square had projected to debut between the range of $11 to $13 per share but late Wednesday night management decided to drop that to $9 to appeal to larger funds. After the price was set, shares opened at $11.20 and then closed its first day of trading at $13.07.

Glancing at the 45% jump during Square's first day of trading might lead investors to thinking it was a success, but that's not the whole story. Square's IPO raised $243 million but that was about $110 million less than it would have generated at Thursday's closing price -- by lowering its offer price to attract interest, the company left some capital on the table. Furthermore, that price was well below $15.46, the valuation at which Square raised cash from private investors last year.

"This deal is representative of companies that are falling out of favor with investors," said Jeremy Abelson, portfolio manager at Irving Investors, according to The Wall Street Journal. "These are companies that are spending a lot to grow their top line but still have a tough path to profitability."

Meanwhile, outside of the IPO market, Marriott International, (NASDAQ:MAR) made a big move this week when it struck a deal to acquire Starwood Hotels & Resorts in a deal worth $12.2 billion. The deal is worth a total of $11.9 billion in stock and $340 million in cash and values Starwood at $72.08 per share. This merger creates the world's largest hotel company with more than 5,500 hotels and 1.1 million rooms across the world. The two companies' combined fee revenue for the past twelve months, ended September 30, surpassed $2.7 billion.

The sale of Starwood, which includes brands such as Westin, W and Sheraton, wasn't a surprise as sale rumors had circulated since late April. The surprise was that the buyer ended up being Marriott; previously, speculation had focused on Hyatt Hotels Corporation, InterContinental Hotels Group and various Chinese companies.

Marriot's purchase of Starwood will give it scale to help fight off growing competition in from start-up's like Airbnb, and give the combined Marriot and Starwood company a much bigger loyalty reward program with more options for customers.

Lastly, in another small surprise, TJX Cos. (NYSE:TJX) – which is the parent company of T.J. Maxx, Marshalls, and HomeGoods – reported its earnings rose 1.3% in the latest quarter due to strong customer traffic. TJX's revenue also moved 5.3% higher to $7.75 billion, which was just above analysts' estimates for $7.73 billion. That sent shares rising roughly 5% during the premarket trading and TJX ended up nearly 10% for the week. 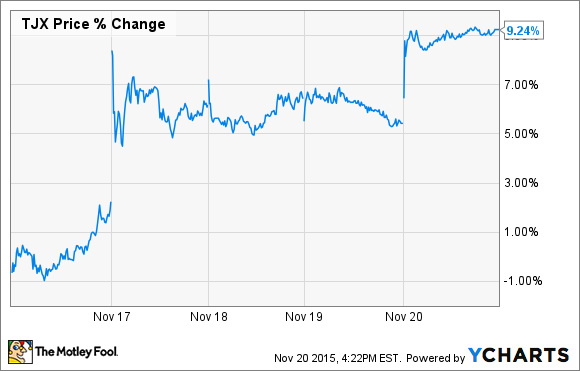 Part of the surprise beat was due to disappointing results from other major retailers last week. However, TJX, along with other off-price retailers, have fared better than the retail industry overall. While TJX's 1.3% rise in earnings may not seem like a huge win, consider that its sales in established stores rose 5%, which was above management's expectations of between 2% to 3%.