Starbucks (NASDAQ:SBUX) is arguably one of the best-positioned retailers heading into the busy holiday shopping season. As consumers begin to flood U.S. malls in search of the perfect gifts, Starbucks is prepared to deliver its most convenient and seamless customer experience yet. Below, I've outlined three ways that the java giant plans to dominate the 2015 holiday season and why investors should take notice.

Limited-edition beverages such as Starbucks' famed pumpkin spice latte should fuel holiday sales for the company. In fact, the java giant could make as much as $100 million in revenue from sales of its pumpkin spice latte alone this season, according to an estimate from Forbes. Starbucks is offering more seasonal lattes and coffee varieties this year than its two largest competitors combined. 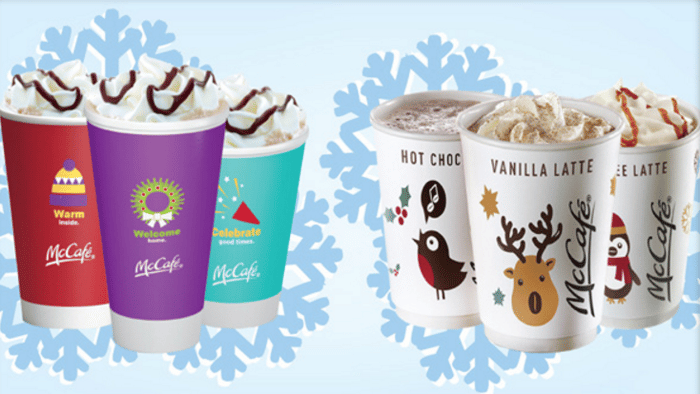 Dunkin' Brands (NASDAQ:DNKN), for example, rolled out three holiday coffee flavors including sugar cookie coffees, snickerdoodle cookie coffee, and peppermint mocha coffee. McDonald's (NYSE:MCD), meanwhile, has enjoyed higher margins from coffee beverages featured in its McCafé concept. However, the fast-food chain hasn't yet said whether it will feature new seasonal coffee products this fall. McDonald's did, however, begin promoting new holiday coffee cups -- though it's unlikely that cup design alone will be enough to poach coffee lovers from Starbucks.

The world's largest coffee chain, after all, is rolling out loads of seasonal lattes sure to impress such as chestnut praline latte, eggnog and gingerbread lattes, and a caramel brulee blend. Starbucks is also bringing back other seasonal favorites across its Frappuccino line including Peppermint Mocha, Toffee Nut, and Christmas Panettone.

Merry Mondays and gift cards galore
Starbucks is using the 2015 holiday shopping season as an opportunity to drive member adoption. The coffee retailer's loyalty program is already one of the strongest around. Still, Starbucks has never been one to rest on its laurels. This year, the company rolled out Merry Mondays for its reward card members. The holiday promotion will last from now through Dec. 7 and feature daily deals for Starbucks reward members when they pay using the Starbucks app.

This upcoming Monday, for example, members can get a free holiday bakery item with their regular coffee purchase. Becoming a member is free and as simple as downloading the Starbucks mobile app. Starbucks hopes this incentivizes more customers to enroll in its membership platform. If successful, the promotion would also lead to an uptick in mobile use for the chain as more consumers use the app. 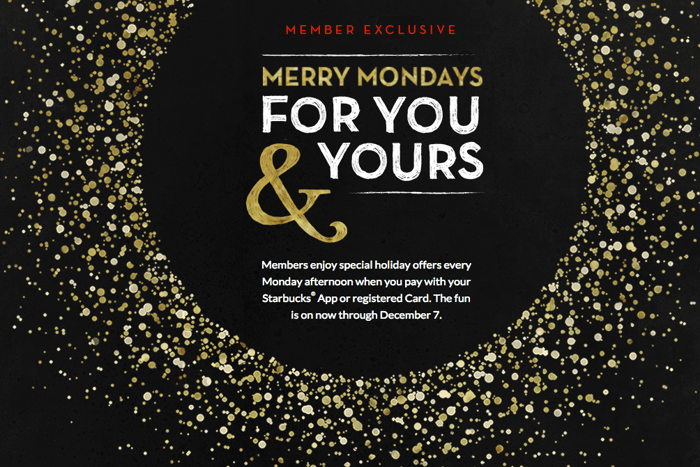 The company's loyalty program, known as My Starbucks Rewards, now boasts over 20 million members worldwide. To give you an idea of just how impressive that is, Dunkin' Brands currently counts fewer than 4 million rewards members as part of its Dunkin' Donuts Perks program. Starbucks also plans to leverage its gift card program in order to hit it big with shoppers this season.

One in seven Americans received a Starbucks gift card during the holidays last year. This led to an incredible $1.6 billion in card cash loads for the coffee chain during the subsequent first quarter of fiscal 2015. This year, Starbucks is getting more aggressive with its approach.

The company is sending out complimentary "Starbucks cards at-the-ready" with online purchases. The bundles include five Starbucks gift cards and envelope sleeves that customers can easily activate and load with cash online at starbucks.com/activate, and then use as gifts for their friends and family. Shoppers will also be able to purchase holiday-themed gift cards in every Starbucks store worldwide this year or send digital cards through email.

Additionally, Starbucks is rolling out a limited number of its premium cards in select stores this season because, well, nothing says holiday cheers like a $200 Swarovski crystal adorned Starbucks card pre-loaded with $50. These specialty cards will only be available until Nov. 22, as the retailer undoubtedly hopes to spark a sense of urgency and demand for the pricey cards. Nevertheless, if Starbucks gift card program is half as successful as last year (and I expect it will be), it would be a big win for the company.

Mobile domination
Convenience will be key for retailers this holiday shopping season, and Starbucks mobile offerings plan to provide just that: a convenient retail experience. The coffee chain is a leader among retail rivals when it comes to mobile technology. In fact, mobile payments (which are more profitable for Starbucks versus traditional card transactions) now account for as much as 21% of all in-store transactions. This figure should continue to grow as Starbucks' new Mobile Order & Pay program continues to gain momentum in the U.S. and abroad.

It's significant that Starbucks was able to launch its Mobile Order & Pay service across all of its company-owned U.S. stores ahead of the holidays. This will make it easier for each Starbucks location to check out guests faster and thereby service more customers during the busy holiday season. This too might encourage more consumers to download the Starbucks mobile app and become loyalty members. As of the fourth quarter, Starbucks active mobile users had increased 32% in the U.S. and Canada year over year.

From the strength of its mobile strategy and gift card program to fresh seasonal offerings, Starbucks is well positioned to dominate the 2015 holiday season. Moreover, many of the initiatives discussed above will continue to boost membership and profitability for Starbucks well after the holidays have passed. Therefore, as an investor, I plan to add to my Starbucks position in the weeks ahead and will continue to hold this stock for many holiday seasons to come.