The eternal question with a company like Caterpillar (NYSE:CAT) is when the cycle will turn in its end markets. As ever with highly cyclical stocks, when the market turns down, its sales fall dramatically, only to rise in similar fashion when conditions improve. In this context, let's look at the underlying sales trends with Caterpillar and what it means for its prospects in 2016.

The following chart shows Caterpillar's stock price (adjusted for stock splits and dividends) compared with its retail sales of machines to end users and original equipment manufacturers, or OEMs. It's a useful measure because there is always a time lag between sales to dealers (which, along with OEM sales, make up the majority of Caterpillar's sales) and dealers' sales to end users.

You can think of the data in these charts as a kind of forward projection of Caterpillar's sales. The current slowdown is notably different than the last one -- the U.S. housing bust caused North America sales to lag, but now the slowdown in energy and resources capital expenditures has caused emerging markets to underperform. 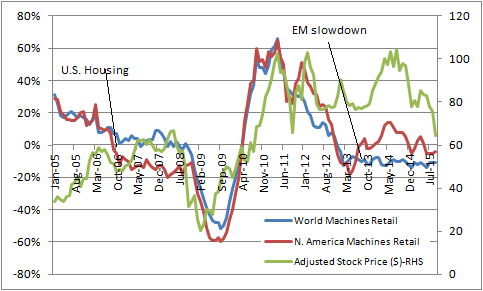 That said, the key thing to focus on now is growth from the current position. The following chart breaks out the contribution per segment and region. All figures are from the most recent third-quarter results, and I've ignored intersegment sales in this analysis.

And now let's look at each segment's retail sales growth in the past two years. Retail sales in construction and in energy and transportation turned negative in 2015, while a bottom appears to have formed in resource industries following a protracted slump. 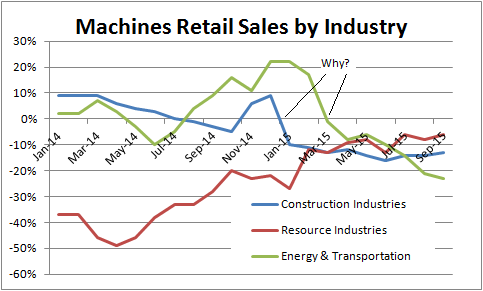 Oil, again
Starting with construction, it appears the overall slowdown is due to a combination of weaker Asia-Pacific growth (construction sales down 27% in the third quarter) and Latin America (a 43% decline), and the negative effects of falling oil prices.

Focusing on oil and gas, in the third-quarter results, Caterpillar stated that improvements in residential and nonresidential construction in the U.S. were offset by declines in energy-related spending. Similarly, Deere & Company (NYSE:DE) management downgraded full-year underlying sales expectations for the construction and forestry segment from 2% growth to a 5% decline. Again, Deere blamed the weakness on a combination of wet weather in the U.S. and a slowdown in demand from the energy sector. 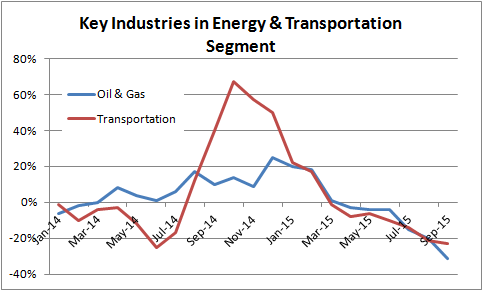 Oil well servicing and drilling equipment has seen sales declines because of a decline in energy spending, but the weakness in transportation (rail locomotive engines) is "primarily due to the absence of a Tier IV locomotive offering."  I've written previously on how General Electric Company stole a march on Caterpillar with Tier IV locomotives.

The good news on the rail front is that Caterpillar expects its Tier IV locomotive to be available from mid-2016, so some recovery in future years is expected.

The takeaway
Looking ahead to 2016, management is predicting a 5% decline in overall sales, with construction sales flat or down 5%, the resource industry down around 10%, and energy and transportation sales down 5% to 10%. But let's recall that forecasts are subject to changes in the end-market environment -- a key consideration with a cyclical stock like Caterpillar.

Therefore, if you like the outlook for oil prices in 2016, then Caterpillar is a worthy candidate as a stock pick. My analysis underpins the importance of energy, and particularly oil, on the energy and transportation segment -- especially as the transportation bit has better prospects in 2016 because of its Tier IV locomotive. Moreover, the weakness in Caterpillar's construction sales is primarily due to oil spending -- something that Deere's results confirm.

In conclusion, while mining is obviously still a consideration, Caterpillar is a good option for investors looking for some exposure to oil in 2016.