Apple is a great business, but even the best businesses face significant risks.

On Oct. 28, Apple (AAPL 3.71%) filed its annual report with the Securities and Exchange Commission, giving a very thorough overview of its financial results for its fiscal year 2015. In this report, the company includes a number of significant risk factors to its business.

Although the intent of this article isn't to suggest that these risks will actually materialize or to disparage Apple (I think that Apple runs a wonderful business), I do believe that it's important -- even for those bullish on a company and its shares -- to understand what could go wrong.

Here are three risks that Apple lists in its annual report that are worth knowing.

Let's talk competition
According to Apple, one risk factor is that "global markets for the company's products and services are highly competitive and subject to rapid technological change, and the company may be unable to compete effectively in these markets."

Apple says that its "ability to compete successfully" is dependent on "its ability to ensure a continuing and timely introduction of innovative new products, services and technologies to the marketplace."

In order to make sure it stay competitive, Apple notes that it needs to "make significant investments in research and development."

Fortunately for investors, it would seem that the company is making the necessary big bets here in order to try to maintain its dominance in the high end of the mobile device market, as you can see below: 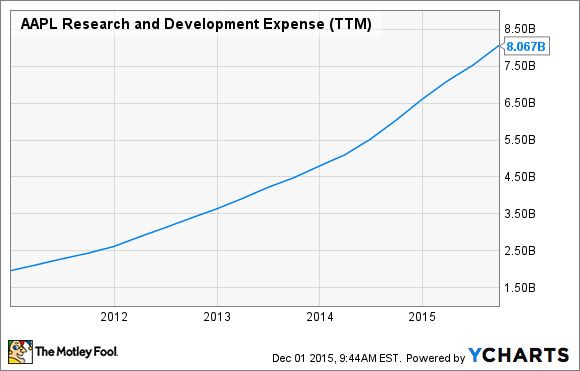 Apple's dependence on others for product distribution
Apple states in its annual report that it relies on network carriers, wholesalers, national and regional retailers, and value-added resellers to get its products to customers. Additionally, as most investors are probably aware, the company also sells products directly to end users via its website as well as through Apple-owned retail stores.

Wireless carriers, Apple points out, that provide network service for its iPhone "typically subsidize users' purchases of the device." According to Apple, a risk that arises from this is that "there is no assurance that such subsidies will be continued at all or in the same amounts upon renewal of [Apple's] agreements with these carriers or in agreements [Apple] enters into with new carriers."

Also noted in its annual report is that some of its resellers view Apple's continued investments in its own online and retail stores as "conflicting with their business interests as distributors and resellers of [Apple's] products."

That being said, Apple says that it has historically invested, and will continue to invest, in "programs to enhance reseller sales." The company warns, though, that such programs "could require a substantial investment while providing no assurance of return or incremental revenue."

Sole sourcing is risky
Apple states that it "currently obtains components from single or limited sources." This, the company says, means that it's "subject to significantly supply and pricing risks."

To try to mitigate those risks, it "has entered into agreements for the supply of many components."

Unfortunately, even this isn't enough to completely eliminate the risk of potential supply issues as Apple points out that "there can be no assurance that [it] will be able to extend or renew these agreements on similar terms, or at all."

Additionally, per Apple, a number of its suppliers "may suffer from poor financial conditions." This, it warns, means that those suppliers could either go out of business or get snapped up by competitors. It feels that these scenarios could make it even harder for it to get enough components to satisfy demand for its products.

Apple also says that its products use some "custom components" that "are not common" to the rest of the mobile device, media device, and personal computer industries. It cautions that in the case when such a component or product employs novel technologies, "initial capacity constraints may exist until the suppliers' yields have matured or manufacturing capacity has increased."