The iPad upgrade cycle is taking a little bit longer than expected, but eventually those consumers will come back for more.

You're probably familiar with the argument that Apple's (AAPL 1.92%) tablet business isn't going so hot right now. Unit sales have been steadily declining for a couple of years, leading to some pessimism and negative press. But the issue right now isn't specific to Apple; it's a categorical decline that we're seeing. The broader tablet market is contracting, and the primary reason is that consumers haven't yet voted with their wallets what an average upgrade cycle will be.

Investors now have more evidence that the tablet upgrade cycle is a little longer than you think.

Survey says
Earlier this month, right before the iPad Pro launched, Localytics released some estimates on the composition of the current iPad installed base. Localytics is a life-cycle engagement platform and looked at over 50 million iPads to derive its figures. According to Localytics, the iPad 2 remains the most popular iPad model out in the wild, representing 20% of all iPad models as of October 2015. 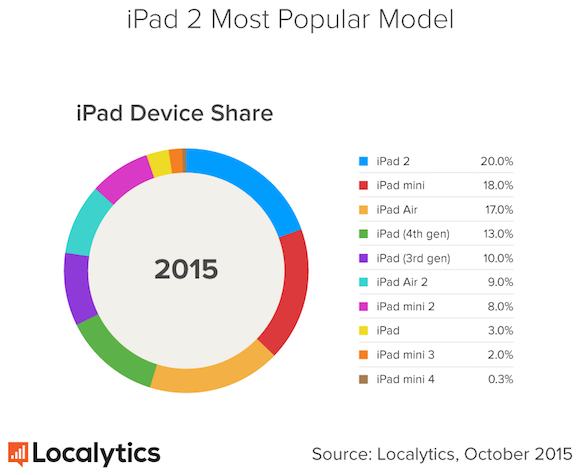 The figures echo the company's estimates from October 2014 when the iPad 2 had a 27% share of all iPads. Localytics notes that Apple's most recent models (iPad Air 2, iPad mini 3, and iPad mini 4) have a combined share of just 12%. The iPad 2's continued strength may come as a surprise since the device was originally released way back in 2011. Despite its age, the iPad 2 had a good long run. It wasn't discontinued until 2014.

What this tells us about the tablet market
The iPad 2's prevalence tells investors two main things about the tablet market. The first is that many of the tablet adopters between 2011 and 2014 opted for a more affordable tablet. While the iPad 2 was the flagship $500 model for the first year, it cascaded to lower price points over time, as Apple likes to do. This suggests consumers are still somewhat tenuous about buying a pricier flagship, even if that extra $100 buys features like a high-resolution Retina display.

The second, and perhaps more obvious, observation is that those consumers who bought iPad 2 models aren't upgrading them. At least not yet. This makes sense because as a product category, smartphones and laptops will always take priority when it comes to upgrading.

Interestingly, it's not as if the annual performance gains are mitigating like the PC has been seeing for years. Intel (INTC 1.25%) hasn't been all that focused on boosting CPU performance recently; it's been focusing on improving integrated graphics performance and power efficiency. Typically, the rate of upgrades is somewhat commensurate with the performance gains since there's much more reason to upgrade for a 40% jump in performance (such as the A7 to A8X) than a 5% increase (such as Haswell to Broadwell). But Apple's chip performance has been skyrocketing.

Yet the iPad upgrade cycle doesn't appear to be driven by performance increases. This also implies that use cases don't demand greater performance. Maybe things like reading books, browsing the Web, or sending emails are dominant tablet activities for the average consumer. Upgrade cycles are also related to usage levels, since obviously no one upgrades a device that they don't use. But Tim Cook has long maintained that iPad owners are very engaged and use their iPads regularly.

It's not if, but when
The encouraging thing here for Apple investors is that it's incredibly unlikely that iPad owners will never upgrade their tablets again. It's just taking a little bit longer than expected. But when those users are due for an upgrade, we know through history that they're almost assured to buy another iPad as opposed to switching to another platform.