The Internet of Things pure play fell hard after a difficult quarter. Here's what investors need to know.

What: Shares of Sierra Wireless (SWIR) fell 28.9% in November, according to S&P Capital IQ data, after the Internet of Things company released disappointing third-quarter results and light guidance for the remainder of the year. That leaves Sierra Wireless stock down more than 60% so far in 2015, badly underperforming the broader market's modest gains: 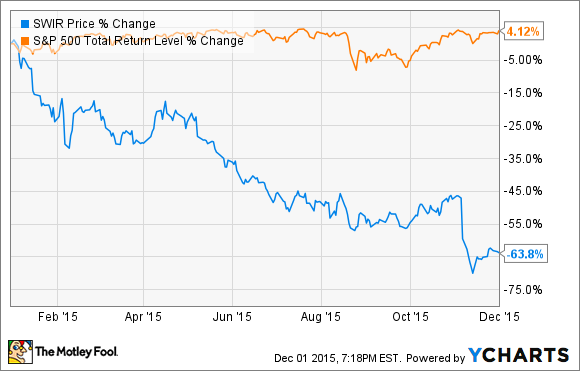 So what: Specifically, Sierra Wireless saw revenue climb just 7.9% year over year to $130.7 million -- well short of its own guidance for revenue of $157 million to $160 million. Management blamed the shortfall primarily on an industry migration toward a new processor platform, which resulted in "temporary headwinds" in demand for 4G-enabled enterprise notebooks. That said, Sierra Wireless also expects this demand to return to normal in the coming months.

On top of that, one of Sierra Wireless' automotive customers adjusted timing of orders in the current quarter to better align with demand, which is partly a consequence of now-resolved RF component supply shortages that plagued the company in previous periods. As a result, Sierra Wireless issued lighter-than-expected guidance for the current quarter, calling for revenue of $148 million to $151 million and earnings per share of $0.09 to $0.11. Analysts, on average, were modeling fourth-quarter revenue of $165.2 million and earnings of $0.29 per share.

Now what: That said, both issues should prove temporary, and Sierra Wireless insisted that its remaining business segments are performing in line with expectations. To be sure, Sierra Wireless enjoyed solid 26.3% sales growth in the key enterprise solutions segment to $23.9 million during the quarter and secured its largest-ever design win with an unnamed international automotive OEM -- though investors will need to wait until 2018 before revenue from that win begins flowing.

But this also highlights an important fact: Sierra Wireless' growth story is still in its early stages, which means these kinds of temporary hiccups can still have a significant negative effect on revenue as the company builds its business from a relatively small base. However, for investors willing to endure this kind of occasionally severe volatility as they watch Sierra Wireless' efforts bear fruit over the long term, I still think this pullback is an attractive buying opportunity.

Steve Symington has no position in any stocks mentioned. The Motley Fool owns shares of and recommends Sierra Wireless. We Fools may not all hold the same opinions, but we all believe that considering a diverse range of insights makes us better investors. The Motley Fool has a disclosure policy.