According to reports, and in a widely expected move, OPEC decided to continue to pump oil at near maximum capacity. This is after it couldn't come to an agreement with non-members to join it in a coordinated production cut. It's a move that will likely keep a lid on oil prices, forcing the market to fix itself.

Instead of agreeing to reduce its output, OPEC actually agreed to raise its production ceiling from 30 million barrels per day, up to the 31.5 million barrels per day that its members had already been producing. On top of that, it is welcoming Indonesia back into the fold after a seven year hiatus. And, while it is a net consumer of oil, its production will be added on top of what OPEC's already producing. In other words, OPEC is firm in its stance that it won't artificially lower production just to boost prices because that would only incentivize other producers to ramp up production.

Why pay to fix what someone else is already fixing
What this means is that the oil market is on its own to get supply and demand back into balance, which is a process that's well under way. Oil reservoir specialist Core Labs (NYSE:CLB) eloquently detailed how the market was repairing itself in the company's third-quarter report pointing out that,

The balancing of worldwide crude oil markets is well under way as evidenced by the continued sharp decline in U.S. production during the third quarter of 2015. Further, the International Energy Agency estimates that worldwide demand will increase in 2015 by as much as 1,800,000 bopd and a further 1,200,000 bopd in 2016 in response to low commodity prices. Tighter crude markets will prevail which in turn will lead to increased demand for Core's unique technology-related services and products.

It has been said that the cure for low oil prices is low oil prices and that certainly has been the case. With sub-$50 oil for much of the past year, two key trends have begun to emerge according to Core: Oil production is starting to slide while new demand has emerged.

Core went into even more detail on the production decline to come by saying,

The chart below clearly shows the impact low oil prices have had on U.S. production: 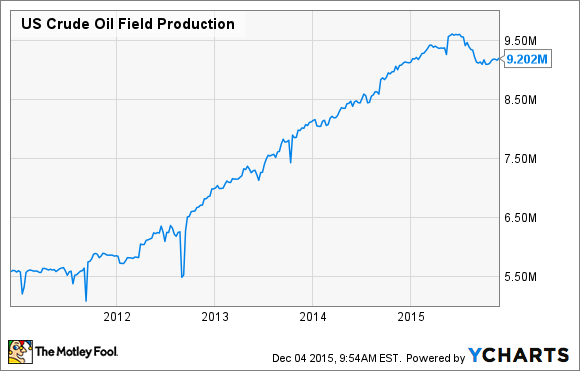 However, the U.S. isn't the only place where production is slipping. Underinvestment in non-OPEC nations like Mexico and Russia is causing production in these nations to roll over as well. Looking ahead, Core noted that,

In 2016, at current activity levels in North America, year-over-year production declines of over 900,000 bopd are expected in Canada and the U.S., while international production levels are expected to continue to decline modestly. The Company believes that recent downward production revisions in Mexico and offshore eastern South America confirm these views, which should precipitate higher commodity prices and the following recovery in Core's business in 2016.

In other words, even without OPEC's help, the oil market is well on its way to fixing the glut. With nearly 3 million barrels of new demand projected by the end of next year and a near 1 million barrel production decline in North America alone, the market is starting to wipe out the nearly 2 million barrel a day surplus.

Investor takeaway
OPEC's decision to not just hold production flat, but to actually pump at full capacity has hurt the oil market in the short-term. That said, it weakened its rivals and spurred new demand, which suggests higher future oil prices. It's a scenario that could actually prove to be very lucrative for the oil countries and companies that come out of the downturn in one piece.