Please ensure Javascript is enabled for purposes of website accessibility
Log In Help Join The Motley Fool
Free Article Join Over 1 Million Premium Members And Get More In-Depth Stock Guidance and Research
By Andrés Cardenal - Dec 5, 2015 at 9:45AM

The king of sportswear has both the willingness and the resources to continue rewarding investors. 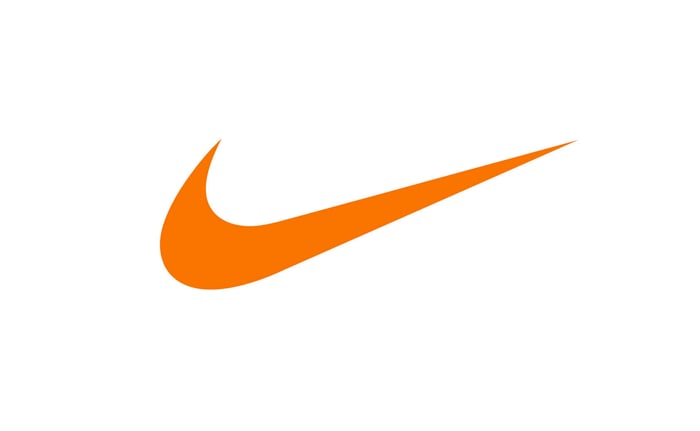 Nike (NKE 0.85%) is not a particularly popular name among dividend investors. This is understandable, since the dividend yield is not high -- less than 1% versus its current stock price. On the other hand, the company is building an amazing track record of growing dividends and buybacks, so maybe Nike deserves some serious consideration from cash-loving investors.

Nike is a world champion in a strong industry
Nike is an undisputed world leader in sports shoes and clothing, a promising industry offering exciting prospects. Consumers around the world are increasingly health conscious, and trendy brands such as Nike, lululemon athletica (LULU -0.71%), and Under Armour (UAA 0.92%) are being used not only inside the gym, but also as informal clothing for everyday activities.

Nike announced a healthy increase in constant-currency revenue of 14% during the first quarter of fiscal year 2016. Gross margin increased 90 basis points to 47.5% of revenue, and the company is keeping operating costs at bay. This allowed Nike to deliver a big annual increase of 23% in earnings per share during the quarter, a kind of performance which is nothing short of impressive for a company as big as Nike.

Lululemon is going through a big transition, since it's still recovering from the see-through pants scandal and the boardroom battles that seriously disrupted its operations in 2013. However, Lululemon still managed to deliver strong growth last quarter, with total revenue increasing 16% year over year to $453 million. Lululemon's comparable sales grew 11% on a constant-currency basis, so the company is clearly making progress when it comes to bringing customers back to its stores.

Under Armour is arguably the most explosive player in the business, and the company is delivering booming revenue growth. Under Armour announced a 28% increase in sales for the third quarter, while revenue in constant currency jumped by a staggering 31% year over year. Under Armour has increased sales at over 20% annually over the last 22 quarters, showing that the company is clearly one of the biggest beneficiaries from vigorous industry demand.

Lululemon and Under Armour are materially smaller than Nike, so it's easier for these companies to deliver faster growth from a smaller revenue base. On the other hand, Nike remains the unequivocal industry leader thanks to its powerful brand, huge global presence, and massive marketing budget. Demand for high-quality sports clothing is soaring, and Nike is in a position of strength to capitalize on this opportunity.

The dividend yield is still modest at less than 1%, but the company's track record of dividend growth is quite impressive, Nike has raised dividends in every year for the last 14 years. When considering both dividends and share buybacks, Nike has returned over $23 billion to investors over that period.

The following chart illustrates the big impact of capital distributions over time, as Nike has been able to reduce the amount of shares outstanding by almost 25% over the long term while at the same time delivering exponentially growing dividend payments. 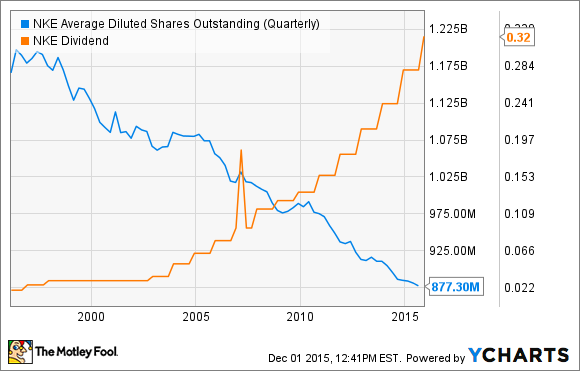 The company has enough financial firepower to make growing cash distributions in the future. The business produced nearly $3.5 billion in free cash flow over the last 12 months, with dividends and buybacks amounting to approximately $3.2 billion. Nike has a pristine balance sheet, and the company can pay for its dividends and buybacks with genuine funds from the business as opposed to relying on debt or other sources of external financing.

Being a leading player in a strong industry, Nike looks well positioned to continue delivering rock-solid financial performance in the future, and management has both the willingness and resources to continue rewarding shareholders with increasing cash distributions over the years ahead. Given the way things are going now, investors in Nike have every reason to expect growing cash payments from the company.

Andrés Cardenal has no position in any stocks mentioned. The Motley Fool owns shares of and recommends Lululemon Athletica, Nike, and Under Armour. Try any of our Foolish newsletter services free for 30 days. We Fools may not all hold the same opinions, but we all believe that considering a diverse range of insights makes us better investors. The Motley Fool has a disclosure policy.