Chipotle Mexican Grill (NYSE:CMG) has an E. coli problem that appears to be getting bigger.

The company's stock has been in steady decline since it had to temporarily shutter a number of restaurants, after at least 52 people in nine states were possibly infected by E. coli, according to a press release from the Centers for Disease Control. The reported cases began in October, and another incident, where up to 80 people were sickened, was reported Dec. 8.

This new case has not been definitively linked to the other incidents, ABC News reported. The Mexican chain has closed the affected location near Boston College, and the ill diners who attend the school are being checked for both norovirus and E. coli.

The company told ABC and other news outlets that it believes the latest incident involves norovirus, not E. coli, but that may be little comfort for investors. In the previously reported cases, the CDC said "the epidemiologic evidence available at this time suggests that a common meal item or ingredient served at Chipotle Mexican Grill restaurants in several states is a likely source of this outbreak."

That's bad news for the company and its shareholders. Chipotle has been aggressive since the first reports of E. coli were made known. It closed restaurants for a deep clean, eliminated potentially affected supplies, and implemented new testing.

To combat E. coli and other foodborne illnesses, the company has enacted even more stringent policies. 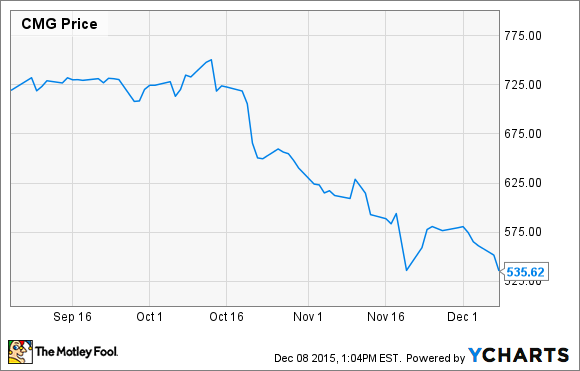 Chipotle stock fell off a cliff when the first reports surfaced. Source: YCharts.com

What is Chipotle doing?
From the moment E. coli was discovered in its stores in Washington state and Oregon, Chipotle has been trying to control it and keep customers safe. The company immediately hired Seattle-based IEH Laboratories to help it identify opportunities to enhance food-safety practices throughout its operations.

Working together, the two companies have come up with a number of initiatives that begin at the farms where Chipotle sources its food and continue through its restaurants. They include:

"While Chipotle's food-safety practices were already well within industry norms, I was asked to design a more robust food safety program to ensure the highest level of safety and the best quality of all meals served at Chipotle," said IEH CEO Mansour Samadpour. "I am happy to report that our proposed program was adopted in its entirety, without any modification."

That sounds nice, but investors and diners aren't likely to be placated until significant time -- weeks, maybe months -- has passed without an incident.

Why is this hurting Chipotle?
The Mexican chain isn't the only company currently facing an E. coli issue. Both Costco (NASDAQ:COST) and Starbucks (NASDAQ:SBUX) have recently been affected by tainted celery potentially carrying E. coli, according to Food Safety News. Both chains had to recall items because of the potential E. coli problem, but neither has experienced a stock drop similar to Chipotle. Starbucks and Costco appear to not be affected by their E. coli scares. Source: YCharts.com

The difference is probably partly because the problems were caught earlier at Costco and Starbucks -- before anyone got sick -- but it's probably also because Chipotle's entire brand is built around its ingredients. The company has marketed the idea that it uses high-quality items, which are in many cases locally sourced.

It even uses the phrase "food with integrity" to describe its menu, and when you promote that idea you leave yourself open to be burned when something goes wrong. Having "better" ingredients doesn't matter if you can't guarantee the safety of those items.

In some ways, the idea of having a brand using many small vendors seems more dangerous when something like this happens. Consumers and investors are going to question the company's procedures and its ability to keep people safe until it proves otherwise.

Costco and Starbucks simply don't have the same problem because their branding isn't built around food.

Will this blow over?
Americans began taking Tylenol again after the deadly 1982 tampering incident. To move past that crisis, the painkiller's maker had to show that it had changed procedures so similar tampering couldn't happen again.

Chipotle should ultimately be able to do the same. It's smart to be working with a respected outside partner in revamping its procedures, and it has handled the E. coli outbreak as well as any company can.

Eventually, the public and investors will forgive and forget, but that may take some time (and new cases just make that period longer). These incidents will hurt sales and Chipotle's stock price for the near future, but at some point it will be in the past, and people will forget. When and how soon that day comes depends entirely on how quickly the company solves the problem and is able to prove to the public that its food is safe.