"The time has come to end the long debate over national energy policy in the United States and to put ourselves solidly on the road to energy independence. ... This bill is only the beginning."

That quote sounds as if it could have been spoken today. But the bill it refers to came with one very big roadblock: It stifled oil production growth in America because it shut the doors to oil exports, which are critical to balancing the oil market. It's a door American oil companies are trying to get reopened in an effort to jumpstart a stalling oil industry.

A flawed law
This roadblock is something that America has realized in hindsight. President Ford spoke those words as he put pen to paper and signed the Energy Policy and Conservation Act on Dec. 22, 1975, effectively banning the export of domestically produced oil in response to the Arab oil embargo. Instead of keeping American oil inside the country, it ended up keeping a lot of it trapped underground. While the law managed to keep American crude slightly cheaper than globally traded oil, that price discount led a lot of producers to cut investments in the U.S. and instead invest in the more lucrative overseas market. The result was a slow and steady slump in U.S. oil production. 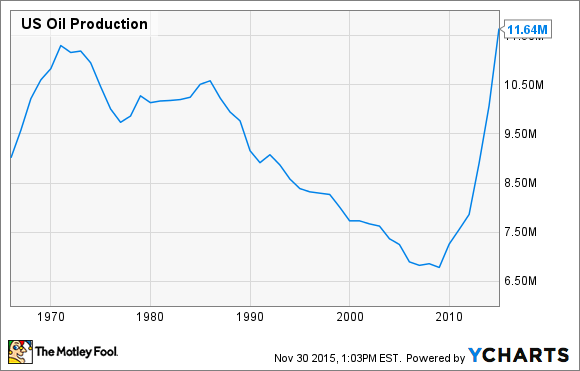 US Oil Production data by YCharts

It wasn't until more recently, when sky-high oil prices combined with new technologies, that America was able to unlock abundant oil supplies long trapped in tight rock formations under North Dakota, Texas, and a handful of other states. It's a combination that finally broke OPEC's will to keep oil prices elevated, forcing it to shift gears to protect its market share.

At the same time, U.S. oil production has been hard hit by the OPEC-induced weakness in oil prices, which is leading to a significant slide in domestic production, costing the country thousands of good-paying jobs. It's a scenario that wouldn't be quite as bad if American producers would just be able to fetch the going global price for their oil, instead of being stuck with the discounted domestic price, which is almost 10% cheaper: 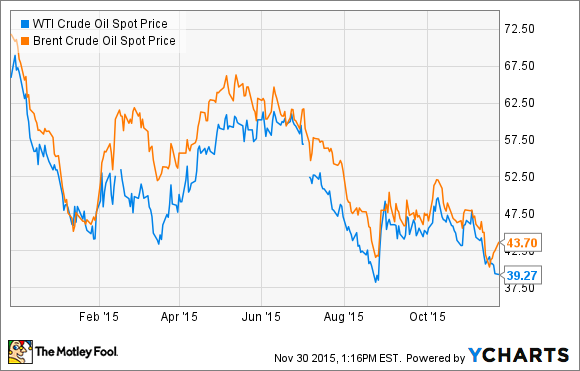 Banding together to end the ban
U.S. oil producers have worked tirelessly over the past year to end this ban to keep the industry from going deeper into a tailspin. One of the leaders of this charge is Continental Resources (NYSE:CLR) founder and CEO Harold Hamm, who recently noted the progress that the industry is making to get this ban lifted:

We continue to see movement toward lifting the 1970s Nixon-era ban, which has never served U.S. national interest and is even more detrimental to everyone today. We have bipartisan support for a reasonable solution lifting the ban and look toward achieving this before year-end. America's energy industry is as competitive as it's ever been and now we're preparing to compete freely once again in a global energy market. Get ready for American leadership to show just what it can do.

If American oil producers take control of the oil market, it would have three distinct benefits, according to a report by ConocoPhillips (NYSE:COP), another producer pushing to end the export ban. First, there have been nearly a dozen economic analyses by research groups, energy consultancies, and government agencies, all of which have concluded that gas prices in the U.S. would decrease if exports are permitted. That's because gas prices are set by global oil prices, not domestic prices. Second, lifting the ban would stimulate more demand for domestic oil, which would create more jobs. In fact, every oil-industry job creates three in the supply chain and six in the broader economy. Finally, ending the ban would shift the global energy market from the Middle East to North America, which would reduce market volatility because the market wouldn't need to count so heavily on oil production from less politically stable areas.

Investor takeaway
Clearly, ending the oil export ban and finally being free of a law that has shackled it for decades would be a boon for American oil producers such as ConocoPhillips and Continental Resources, at least in the short term. They'd earn a little more cash per barrel, which is desperately needed right now. Even so, one of the reasons the industry has gotten itself into such a pickle is greed. Oil companies leveraged up to grow production during the boom years, and now they're not only sitting on more oil than the market can handle, but OPEC is also punishing them for upsetting the apple cart.

However, an even more unsettling thought is that such a law to end the ban on exports might have its own set of unintended consequences as the one that put that ban in place. That's the concern that the industry has yet to address, and the one that could keep American oil down for longer than the industry had hoped.