Healthcare stocks as a whole have had a very volatile year, but the real laggard has been the pharmaceutical sector. Whereas the SPDR S&P Biotech ETF has risen 8% year to date (through Dec. 9), the Market Vectors Pharmaceuticals ETF is precisely flat. Normally a leader, healthcare conglomerate Johnson & Johnson (NYSE:JNJ), which leans heavily on its pharmaceutical segment to drive growth, is down about 2% year to date.

Johnson & Johnson's best headlines in 2015
Some investors would chalk this up as a bad year for Johnson & Johnson, which is one of the most widely-held stocks. However, if we look at a 45-year chart of this healthcare giant, we'd see a company up well over 9,400%. It's a good reminder to take the big picture in when evaluating the performance of a company within a one-year time frame.

Despite the subpar stock performance this year, Johnson & Johnson has produced a number of eye-catching headlines in 2015 that should have investors excited about its potential in 2016 and beyond. Let's have a brief look at what are arguably J&J's best headlines this year.

10 novel blockbuster drugs on the way? Yes, please!
Possibly the biggest headline came in May, when Johnson & Johnson announced aggressive plans to file for approval of more than 10 new products by 2019. Bringing new drugs to market isn't anything new for J&J, but the fact that Johnson & Johnson expects each of these drugs to deliver $1 billion or more in annual sales is the real surprise.

Between 2009 and 2014, Johnson & Johnson brought 14 novel therapies to market, of which seven became blockbusters ($1 billion-plus in annual sales). If the company can add another 10 (or more) before the end of the decade, it's plausible that pharmaceutical growth can remain in the high-single-digit percentage range.

We've already seen J&J's hard work pay off with the approval of Darzalex (previously daratumumab) in November, a third-line-and-beyond treatment for multiple myeloma. Darzalex has the potential to siphon market share from Amgen's (NASDAQ:AMGN) Kyprolis, which the Food and Drug Administration recently approved for the second-line setting but has made its home as the third line and beyond for years. Although Amgen's Kyprolis and J&J's Darzalex haven't done a head-to-head trial, the clinical studies that led to their approval had similar compositions with multiple myeloma patients progressing on a median of five prior therapies. Kyprolis delivered an overall response rate of 23% in the third line and beyond, but Darzalex's was a bit higher at 29%. Again, no head-to-head trial has been conducted, so we can't say one is better than the other with any certainty, but this data could give Darzalex a heads-up on its competition.

Sharing is caring (for a 53rd straight year)
The year seemingly isn't complete for Johnson & Johnson unless the company rewards shareholders with a dividend increase. In April, J&J announced that it was raising its dividend by 7.1% to $0.75 per quarter from $0.70. This marked the 53rd consecutive year that J&J has upped its dividend payout.

Johnson & Johnson belongs to an elite class of dividend payers known as Dividend Aristocrats, or stocks that have increased their annual payout in each of the past 25 (or more) years. Fewer than a dozen publicly traded stocks have a longer dividend increase streak than J&J. (For added context there are more than 7,000 publicly traded companies.)

J&J's current dividend yield of 3% is nicely above the average of the S&P 500, and it provides a solid impetus for long-term investors to buy and hold the stock. 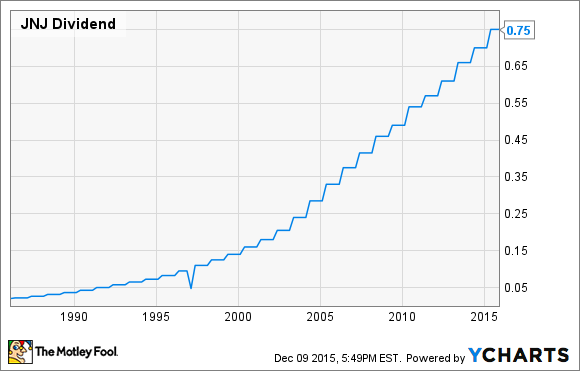 We can also lump in the company's announcement in October that it planned to repurchase $10 billion worth of its common stock from time to time. Repurchasing stock lowers the number of outstanding shares and has the potential to boost EPS, ultimately making a company look more attractive on a valuation basis and possibly lifting its share price.

Long story short, J&J continues to operate in the best interests of its shareholders year in and year out.

Rearranging the puzzle pieces
Finally, J&J's early March announcement that it was selling its Cordis business unit -- Cordis develops and manufactures vascular medical devices -- to Cardinal Health (NYSE:CAH) for an aggregate value of $1.99 billion is significant for a number of reasons.

Johnson & Johnson has been committed to enhancing its fastest-growing segments (primarily pharmaceuticals), and it's been looking to divest slower-growth assets. The divestment of Cordis to Cardinal Health generates additional cash that J&J can use for shareholder returns or to make earnings-accretive and complimentary acquisitions. J&J's management team implied during its latest earnings conference call that it's very much on the hunt for an acquisition, but it's also not in any hurry to make a deal. Keep in mind that J&J is comprised of around 250 subsidiaries, so the ongoing divestment of non-core assets appears to be a smart move to boost its already robust net cash position and to boost its long-term growth potential.

The deal isn't bad for Cardinal Health, either. An aging population should help boost Cordis' business over the long run. Cardinal Health anticipates that Cordis will begin adding roughly $0.20 in EPS to its bottom line beginning in 2017.

What's next for J&J?
Now that you have a better idea of what J&J's best headlines were from 2015, let's hit the most important question of all: Should you own J&J?

The answer is that it depends on your investing strategy, but I would certainly encourage long-term investors, and especially investors who are already retired, to consider adding J&J to their portfolios. J&J has an immaculate streak of dividend growth, a 31-year streak of adjusted EPS growth, and its diversified business provides cash flow in practically any economic environment. J&J's high-growth days may be history, but its cash flow consistency appears to suggest plenty of upside may be realized over the long run.