Wal-Mart (NYSE:WMT) is one of the most reputed dividend stocks on the market. The retail juggernaut paid its first dividend in 1974, and it has raised payments each and every year since then. What was an annual dividend of $0.05 in 1974 has now grown into $1.96 per year, representing a 3.4% yield at the current stock price.

But Wal-Mart's revenue has come under heavy pressure lately, and dividend growth has materially slowed down over the past couple of years. Can Wal-Mart continue increasing dividends in 2016 and beyond?

Wal-Mart is facing big challenges
Growth tends to naturally slow down as a company gains size over the years, and Wal-Mart has reached a truly gargantuan scale. The company has over 11,500 stores serving nearly 260 million customers per week around the world. Wal-Mart is the biggest retailer on Earth in terms of revenue, and analysts are expecting $483.5 billion in sales from the company during fiscal 2016.

Scale is a big advantage for Wal-Mart, as the company gets to leverage its bargaining power to obtain competitively low prices and attractive payment conditions from suppliers. On the other hand, it can be complicated for a company as big as Wal-Mart, operating in a mature industry, to find new growth venues.

Making things worse, competition from the likes of Amazon.com (NASDAQ:AMZN) and Costco (NASDAQ:COST) is putting additional pressure on Wal-Mart. Both Amazon and Costco are redefining the rules of the game in discount retail with their smart and innovative business models, Amazon by leading the online retail revolution and Costco by pioneering the warehouse retail business model.

When comparing sales growth for Wal-Mart vs. Amazon and Costco over the past several years, there is little room for doubt that Amazon and Costco are clearly outperforming the retail giant and stealing market share. 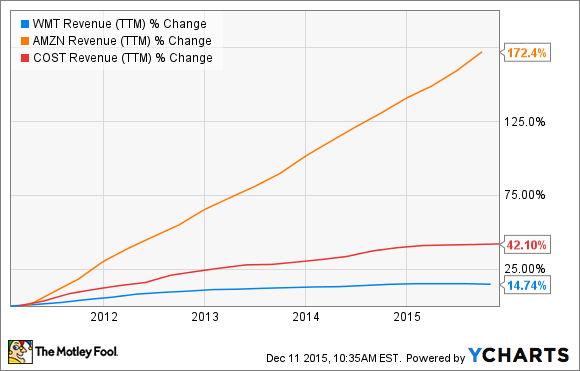 In this context, Wal-Mart is delivering uninspiring sales growth. Revenue in U.S. dollars declined 1.3% during the third quarter of fiscal 2016, while sales in constant currency grew 2.8%. Comparable sales at Wal-Mart U.S. grew 1.5% versus the same quarter last year.

Because of decelerating sales growth, dividend growth has slowed substantially in the past few years. Wal-Mart has raised quarterly dividends by only $0.01 in both 2014 and 2015, first from $0.47 quarterly to $0.48 and then from $0.48 to $0.49. In percentage terms, this means the latest dividend increase from Wal-Mart was a lackluster 2%.

The company is planning to increase investments in key areas such as e-commerce and employees to improve the customer experience and accelerate sales growth. Management calculates that revenue growth should be in the range of 3% to 4% annually in the next three years, so growth will remain subdued, even if Wal-Mart delivers in accordance with management's expectations in the middle term.

Can Wal-Mart raise dividends next year?
During the nine-month period ended on Oct. 31, Wal-Mart produced nearly $15 billion in operating cash flow. Capital expenditures absorbed $8.2 billion of that money, leaving the company with $6.8 billion in free cash flow to distribute to investors. Dividends amounted to $4.7 billion during the period, or roughly 57% of free cash flow. This is quite a reasonable cash flow payout ratio for a stable and mature company such as Wal-Mart, so the business is financially strong enough to continue raising dividends.

However, Wal-Mart also recently announced a new and aggressive share-buyback program for $20 billion over three years, a significant increase versus only $1.7 billion allocated to buybacks over the past nine months. Management seems quite committed to accelerating share repurchases in the middle term, and this will take considerable financial resources away from dividend increases.

Wal-Mart has a pristine track record of growing dividends over the decades, and the company has the financial strength to increase payments again in 2016. That means Wal-Mart will most likely announce another dividend increase next year so it can continue building its reputation as a solid and dependable dividend growth stock.

However, the company is facing some big challenges. Revenue growth remains under pressure, and management is prioritizing buybacks over dividends when it comes to capital distributions. With this in mind, investors shouldn't expect a big dividend increase from Wal-Mart next year. Wal-Mart will probably raise dividends again in 2016, but the dividend increase will probably be modest, perhaps in the low to mid-single digits.