Following in the steps of CEOs Lee Raymond and Rex Tillerson, ExxonMobil's (NYSE:XOM) board of directors recently promoted Darren Woods to president and gave him a spot on the board. With current CEO Tillerson's time at the helm in its twilight -- ExxonMobil has a mandatory retirement age of 65 -- many analysts out there assume that this paves the way for Woods to be the company's next CEO.

Having Woods head the company would mark a slight change from his predecessors who held the reins for more than 25 years. Let's look at Woods' background at ExxonMobil and how his path through the company could signal a change in the company's direction.

Tillerson's (uncompleted) legacy
When Tillerson took the CEO position in 2005, he was filling some big shoes. His predecessor, Raymond, had been in charge for more than a decade and had transformed what was then Exxon into the $300 billion behemoth it is today, mostly as a result of its acquisition of Mobil in 1999. Raymond had continued the company's legacy of spending consistently through the ups and downs of the cycle, avoiding higher-cost projects when the company was flush with cash and maintaining investment levels during the scarce times.

For the most part, Tillerson has continued on this path. Compared with its peers, ExxonMobil has kept a more conservative spending approach. However, there have been changes in ExxonMobil's spending habits over the years. The most noticeable difference between the past five years of Raymond's tenure and the 10 years of Tillerson's is the massive ramp-up in spending over that time. What may go unnoticed, though, is the change in how that money is being spent. Under Raymond, ExxonMobil would spend 60% to 75% of its capital budget on downstream and chemical operations, while under Tillerson, capital spending has leaned much more to upstream exploration and production. From 2005 to 2014, ExxonMobil's capital budget increased by $20 billion, but of that increase, only $1.7 billion more was spent on downstream and chemical operations.

These spending trends shouldn't be too surprising, considering that Tillerson cut his teeth on the exploration and production side of the business. Over this time, the company has increased its total resource base by more than 26% to 93 billion barrels of oil equivalent that are either proven reserves or are being evaluated, and the current production growth program should lead to a modest 5% production growth. 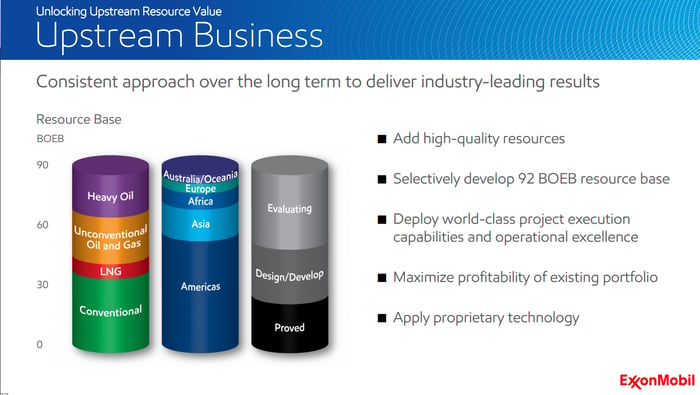 Back in 2013, management said that year would be the peak of the company's spending and would decline from there, and so far that has happened. This year's expected budget of $34 billion is a 20% reduction from that 2013 peak, so the company may be able to cash in on some of those higher spending levels.

Change of pace?
Unlike his two predecessors, Woods has mostly been on the refining and chemical side of the business. Perhaps the nomination of Woods to the top spot is a signal that ExxonMobil will make a larger push into this side of the business, after it spent years taking a back seat to upstream production. After all, thanks to the boom in oil and gas production in the U.S., there has been a shifting dynamic in chemical manufacturing that seems ripe for investment.

The boom in natural gas production across the U.S. has also led to an overabundance in ethane and propane, two base feedstocks that chemical manufacturers use commonly. Up until recently, many of the chemicals that can be made from these feedstocks have been using naptha and have been produced overseas. However, even when we consider how much oil prices have declined, the abundance of ethane and propane in the U.S. makes it a cheaper manufacturing option. 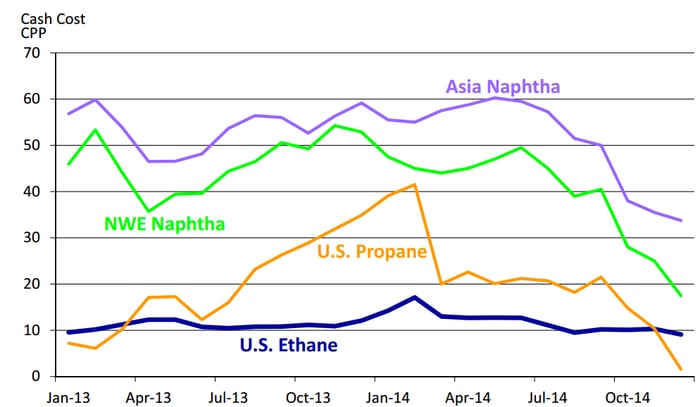 The economics for chemical manufacturing isn't lost on ExxonMobil. Last year it broke ground on an ethane cracking facility at its Baytown refining facility in Texas that will process up to 1.5 million tons of ethane annually.

With Woods' experience on this side of the business, and the economics on chemicals such as ethane-based base chemicals in the U.S. and global demand for lubricants, it wouldn't be surprising if the company were to shift more of its spending toward these kinds of projects and bring the capital spending mix back toward the days of Raymond's tenure.

That might be healthy for the company in the long term. Higher upstream spending and a few downstream investments mean the company's prospects have become more closely tied to the production side of the business and, by default, oil and gas prices. For many investors, the value of owning ExxonMobil's shares is that its combination of upstream production and downstream refining help to provide more stable earnings that don't wax and wane with oil prices. So bolstering its downstream and chemical business could help restore that balance between the two business segments.

What a Fool believes
Based on ExxonMobil's corporate policy, Tillerson will probably remain in the CEO position until 2017. And even though Woods appears to be following the same track that Raymond and Tillerson did to the CEO position, there's no absolute guarantee that it will happen.

If he were to become the next CEO of ExxonMobil, though, he would be coming from a different background from the two people who ran the company for the past 25 years. That could mean the company shifts its investment strategy more toward Woods' strengths in the downstream side of the business. For investors who look to ExxonMobil to be a stable ship in the choppy waters of the energy space, that could be a welcome change.