The memory-chip manufacturer suffered from a raft of bad news during 2015, but there were still some positive developments for the company.

Micron Technology (MU -3.38%) has had a tough year. The stock has tumbled nearly 60% year to date as DRAM oversupply went from a prediction to a reality, and the company now expects to post a loss during its second fiscal quarter. For Micron investors, 2015 is a year to forget. 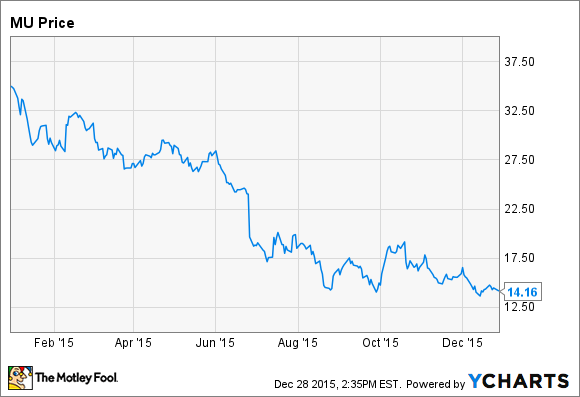 Despite these challenges, there was some good news for Micron during 2015. Here's a look at some of the best headlines of the year.

Feb. 10: Better terms
Prior to Micron acquiring the portion of joint venture Inotera that it didn't own in December, Micron had a deal in place where it purchased all of Inotera's DRAM output. In February, Micron announced that the terms of the deal had been amended, allowing Micron to purchase Inotera's DRAM at a discount to market prices for the rest of 2015. Shares jumped to around $30 per share on the news, which came one day after an analyst at Jefferies put a $42 price target on the stock.

Feb. 13: A partnership with Seagate
About one-third of Micron's revenue comes from non-volatile NAND memory chips. As NAND chips have fallen in price over the years, solid-state-drives have become more competitive with hard disk drives in terms of capacity-per-dollar. This threatens the two major hard drive manufacturers, Seagate and Western Digital. Seagate also sells SSDs, and in February, the company announced a partnership with Micron, giving the hard-drive company a dependable source of NAND chips. In return, Micron acquired a client with relationships with server and storage companies, potentially allowing the company to grow its market share.

Feb. 17: Optimism at analyst day triggers upgrades
Micron held an analyst day event in February, and the company struck an optimistic tone. Analyst upgrades followed, with RBC raising its price target to $44, and Jefferies bumping its price target to $45. Micron pointed to its record results, a return-focused DRAM expansion strategy, and the fact that Micron led the S&P 500 in terms of total shareholder return over the past two years.

March 26: 3D NAND launch
In March, Micron announced that it was launching a line of 3D NAND chips with partner Intel (INTC -0.75%). The companies touted their solution as superior to products offered by rivals like Samsung, with higher densities, lower costs, and improved performance. Technology website Anandtech did an analysis, finding that Intel/Micron's 3D NAND was the most efficient 3D NAND product to date.

July 13: Einhorn defends Micron
Micron was the biggest loser for David Einhorn's Greenlight Capital during the second quarter, but the hedge fund manager defended the company. Einhorn stated that he believed that the three DRAM manufacturers were behaving more rationally compared to the past, leading to a positive long-term outlook. Einhorn also stated that Micron's earnings would bottom out in positive territory during the third calendar quarter, a prediction that turned out to be very wrong.

July 13: Buyout offer from Tsinghua Unigroup
In July, the Chinese state-owned Tsinghua Unigroup was reportedly offering to buy Micron for $21 per share, or about $23 billion. The deal didn't happen, with regulatory concerns playing a major role, but the news sent the stock surging, at least temporarily.

July 28: 3D XPoint memory
In July, Intel and Micron announced a new type of memory, called 3D XPoint. 3D XPoint is non-volatile, like NAND, but is up to 1,000 times faster, in addition to being 10 times denser than DRAM. Commercial shipments are expected in 2016, with both Intel and Micron set to make 3D XPoint products. The new type of memory could add an additional layer between DRAM and NAND in enterprise data centers, although cost will ultimately determine how quickly 3D XPoint catches on. Intel is the overwhelming leader in the server CPU market, and 3D XPoint offers a way to expand the amount of content that Intel sells to its data center clients.

Timothy Green has no position in any stocks mentioned. The Motley Fool owns shares of Western Digital. The Motley Fool recommends Intel. We Fools may not all hold the same opinions, but we all believe that considering a diverse range of insights makes us better investors. The Motley Fool has a disclosure policy.