Frack sand stocks have had a calamitous 18 months. Find out three key facts about 2016 that could make or break investors' portfolios.

The oil crash has proven devastating to frack sand producers U.S. Silica Holdings (NYSE: SLCA), Emerge Energy Services (NYSE: EMES), Hi-Crush Partners (NYSE: HCLP), and Fairmount Santrol (NYSE: FMSA). With all four stocks trading near all-time lows, investors may be wondering whether or not it's worth continuing to hold or even open or add to positions at these fire-sale prices.

So let's look at three key elements based on management comments from the latest earnings conference call, about what to expect in 2016 that may mean the difference between a once-in-a-generation long-term investing opportunity, or a hopeless value trap. 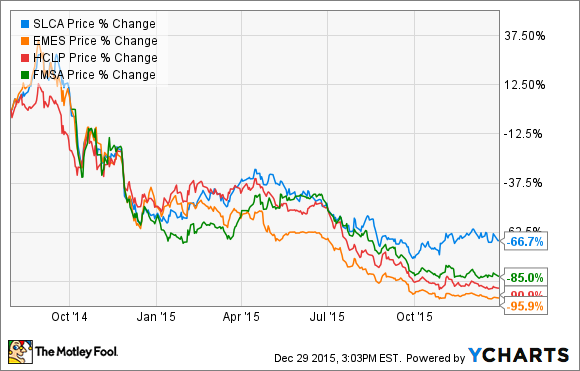 In light of the strained business environment, we believe additional industry consolidation may be in order. Consequently, we are having strategic discussions in this regard with a number of industry participants.-- Ted Beneski, Chairman, Emerge Energy Services

As you can see, over the past year, America's four largest frack sand producers have seen their market share increase as smaller, less capitalized competitors have either gone out of business, or been unable to compete with their larger and better organized transportation logistics networks. This is a trend that Fairmount Santrol thinks is likely to continue and result in more dominant and profitable companies once crude recovers.

Even Emerge Energy, whose debt-heavy balance sheet recently forced a renegotiation of its debt agreements with creditors, has stated that creditors remain supportive of the MLP acquiring smaller, distressed competitors, as long as additional debt isn't required to finance such deals.

Meanwhile, U.S. Silica management has stated that buying up weaker competitors is the company's top priority when it comes to allocating increasingly scarce capital.

Hi-Crush Partners is taking a different approach to M&A, focusing not on increasing capacity but on expanding its already vast distribution network. This is because the cost of producing sand is ultimately only about 25% of the ultimate cost at the wellhead, so the sand producer with the most efficient transportation network has a competitive advantage that can increase market share.

Balance sheet strength is more important than ever

We have what I believe to be one of the strongest balance sheets in the business, which will allow us to navigate the current market uncertainty and respond quickly to opportunities, to make a strong company even stronger. -- Donald Merril, VP and CFO, U.S. Silica

As you can see, there are large differences in the strength of the balance sheets between these companies and MLPs. This is important for investors to keep in mind, because in an age of much cheaper oil, more leveraged sand producers such as Hi-Crush, Emerge Energy, and Fairmount are at the mercy of their creditors. In fact, all three recently had to amend their credit facilities because plummeting EBITDA was forcing them into violation of their existing debt covenants, especially those limiting their leverage ratios (debt/EBITDA).

Fairmount's amended agreement raised its allowable leverage ratio to 6.5 through Q1 of 2017 while those of Emerge and Hi-Crush waive the debt covenant ratios entirely through mid-2018 and mid-2017, respectively.

However, though granting both MLPs some breathing room, they also came with harsh stipulations. Not only does each MLP face a diminished borrowing base and higher interest rates, but in Emerge Energy's case, creditors are severely curtailing the MLP's ability to invest in further expansion into 2019.

Recovery may not happen in 2016

The consensus industry expectation of the timing of a recovery is now moving to late 2016 or even 2017. Headwinds may not be limited to just a quarter or two, but it could potentially be present for as long as a year or more. -- Robert Rasmus, CEO High-Crush Partners

The combination of rising global demand for oil and falling non-OPEC production has the IEA predicting crude's supply glut will shrink by 1.8 million barrels per day, or bpd.

However, with Iran promising to increase production by 1.5 million barrels bpd thanks to the ending of nuclear sanctions, as well as global oil stockpiles at record levels, increasing oil prices in 2016 are far from guaranteed.

Bottom line:
No one can predict when oil prices will finally turn around, or by how much. While a sharp recovery in 2016 is possible, investors need to be aware that the investment thesis for these four companies is a multi-year story. When it comes to 2016, such expectations are purely speculative.

Adam Galas owns units in Emerge Energy Services and Hi-Crush Partners. The Motley Fool recommends U.S. Silica Holdings. Try any of our Foolish newsletter services free for 30 days. We Fools may not all hold the same opinions, but we all believe that considering a diverse range of insights makes us better investors. The Motley Fool has a disclosure policy.