If you merely read the news headlines, Visa (NYSE:V) and MasterCard (NYSE:MA) are in a world of hurt. Higher incentive spending is hurting revenue and profits. See these two recent examples.

In June, one headline read that "MasterCard's Revenue Misses Estimates on Higher Incentives."

In October, another read "MasterCard Revenue Dented by Rebates."

Two quarters in a row and Wall Street collectively hits the panic button. You shouldn't.

If banks can demand a greater share of the card network's revenue, card network profit margins will shrink. Profit growth will slow. Visa and MasterCard would no longer justify their above-average valuations. 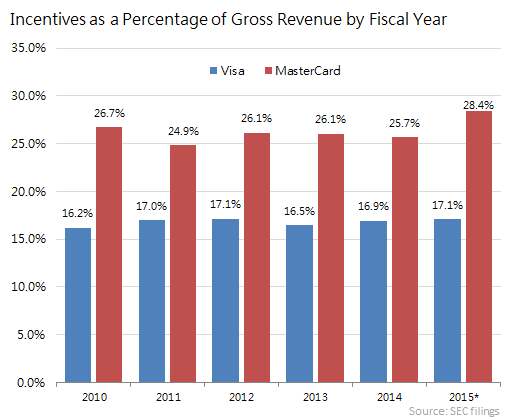 I'll concede that looking backwards doesn't provide a perfect view. Contracts between banks and card networks are lengthy, often spanning several years. What we see on the income statement today is a reflection of deals that were signed years ago. This is important to consider as we think about what the income statement can tell us about Visa and MasterCard's place on the plastic card totem pole.

However, the tunnel vision on incentive expenses completely ignores developments elsewhere in the financials. As a whole, Visa and MasterCard are becoming much more efficient at acquiring transaction volume, not less efficient.

Incentive spending is just half the puzzle. It's the price the networks pay to "buy" a bank's customers. The alternative is traditional marketing expense, which is recorded in a completely different line item on the income statement. 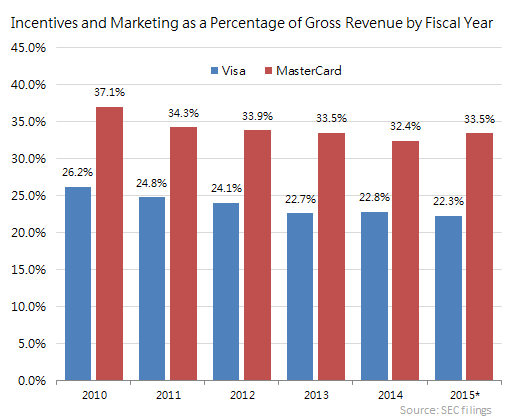 If our sole goal is to measure Visa and MasterCard's efficiency in gathering transaction volume, the best measure is "incentive" expenses plus "marketing" expenses. When combined and divided by gross revenue, you'll see a trend of generally lower spending to acquire transaction volume as a percentage of revenue.

This chart not only captures more of Visa and MasterCard's spending to acquire customers, but it shows that total marketing spending as a percentage of gross revenue is falling. While incentives expenses are growing marginally, the impact is more than offset by declining marketing spend elsewhere.

It is important that banks are taking a greater part of the networks' revenue. It stands as evidence that Visa and MasterCard may not have as much pricing power through this channel as they had in the past. But it's hardly a death knell.