Hint: It's not liquid, but you can pick up a six-pack at a discount.

It seems an understatement to say Amazon.com (AMZN 1.42%) had a fantastic 2015. Spurred by one spectacular quarter after another, shares of the online retail behemoth more than doubled from start to finish last year, crushing the S&P 500's modest 1.4% gain over the same period: 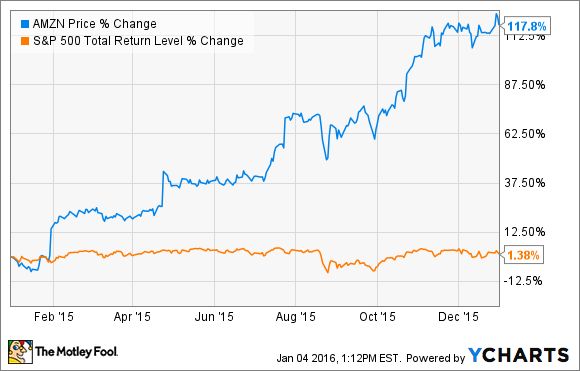 Of course, Amazon has yet to release specific financial results for the fourth quarter -- though current guidance provided along with last quarter's report did suggest investors should expect a "record holiday season." More specifically, revenue is expected to be in the range of $33.5 billion to $36.75 billion, good for growth of 14% to 25% over last year.

We can also safely assume the majority of Amazon's revenue will continue to come from its core retail business in this crucial period. That growth will be collectively driven by the millions upon millions of products across Amazon's flagship website.

With that in mind, you can't help wondering: Of all the millions of products available on Amazon.com, which has enjoyed the greatest demand from consumers?

To be clear, Amazon hasn't released a full list of its most popular products for all of 2015. But if a press release from Amazon last week is any indication -- and keeping in mind the outsized influence of fourth-quarter holiday sales -- there's a good chance the No. 1 product on all of Amazon.com in 2015 was one of its own making.

One tablet to rule them all
More specifically, Amazon just revealed its own hardware devices enjoyed their biggest-ever holiday season, with sales more than doubling over last year's record-setting period.

Within that group, one device clearly stands above the rest in terms of popularity: the all-new Fire tablet.

Amazon's new Fire tablet was its most popular item in a record-setting holiday season. Credit: Amazon.com,

According to Amazon, the 7-inch Fire tablet has been the No. 1 best-selling, most wished-for, and most-gifted product across all of Amazon.com since its release almost four months ago.

Don't let the Fire tablet's simple appearance fool you: When Amazon first introduced the 7-inch device at just $49.99 in mid-September, it not only boasted of having the best display of any tablet under $50, but it also claimed to be almost twice as durable as Apple's latest iPad Air (as measured in tumble tests) while having twice the processing power of Samsung's Galaxy Tab 3 Lite.

What's more, Fire comes with Amazon Underground, giving users access to thousands of paid apps and games at no extra cost. It also includes a slew of other Amazon-exclusive products and services, including the kid-centric Freetime interface, unlimited cloud storage for all Amazon content, and a new user interface that has garnered wide praise from reviewers.

And for those ultra-efficient holiday shoppers, Amazon even offers a six pack of Fire tablets for just $249.95.

Finally, Amazon further fueled Fire's popularity by launching the device in China in early December, touting the tablet's exclusive features tailored to Chinese consumers learning to read English, as well as a wide selection of Chinese and English content.

Perhaps in retrospect, it should come as little surprise that Amazon's affordable new Fire tablet has sold so well.

Playing the long game
This also raises the question: How can Amazon possibly make any money selling Fire at under $50? The short answer is that it probably doesn't -- at least on the device itself.

After all, Amazon has made no mystery of its strategy of sacrificing margins over the near term in favor of grabbing market share and top-line growth. But in Fire's case, that growth will come not only from revenue generated from the actual sale of the device, but also, and more significantly, through complementary revenue streams from Amazon-exclusive services like Prime, Amazon Instant Video, and supplementary app store sales.

But if one thing is sure in the end, it's that Amazon is pleased with Fire's remarkable rise so far. If it manages to continue growing in popularity in the coming year, I see no reason Amazon stock won't follow suit.