It may be a tall order, but the stock could continue higher if management executes well. 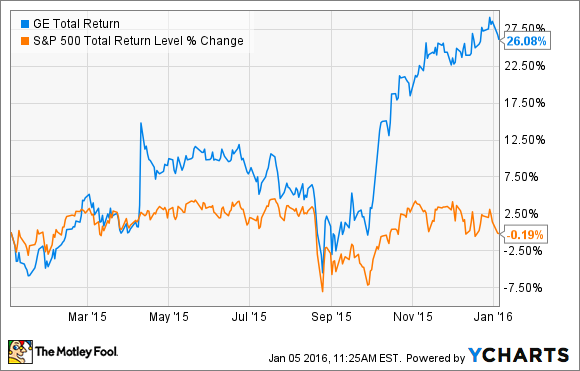 This year, the industrial giant will continue to make progress toward its massive restructuring plan, announced last April, to largely exit the financial services business and divest around $275 billion in financial assets related to GE Capital. Once completed, GE expects the move will return the company back to its industrial roots, subject it to less scrutiny from financial regulators, and allow it to return $90 billion in capital to shareholders in the form of buybacks, dividends, and share exchanges by 2018.

GE also closed out 2015 with its largest acquisition in history: Alstom. The $10.3 billion deal is expected to be a significant earnings driver in the years ahead, and will help GE reach its goal where 90% of its operating earnings come from industrial activities in full-year 2018.

Overall, 2015 was a major transition year aimed at reenergizing growth. Will it all come together and make 2016 GE's best year yet?

Moving fast
Management took immediate action after it announced the company will be exiting the financial services business last April. Of the $275 billion in assets GE pledged to divest, it already announced $149 billion in sales and completed a $65 billion spinoff of Synchrony Financial. The remaining assets are likely to be sold off later this year before the interest rate environment changes. After all, low interest rates have made it an attractive environment for GE to sell GE Capital's financial assets to yield-starved buyers.

The Alstom deal, which sat in limbo for months before getting approved by regulators, gives GE the ability to leverage new technology and expertise, creating significant cross-selling opportunities, synergies, and product solutions. Management expects Alstom to generate about 15% earnings growth per year between now and 2018, and drive $3 billion in annual cost savings and synergies five years after the merger.

Competitively speaking, GE can now combine its gas turbine technology with Alstom's steam turbine expertise and create the world's most efficient power plant for utilities. In terms of opportunity, there are still 1.3 billion people in the world who lack access to reliable electricity today. Suffice it to say, this opportunity is quite large and open ended.

The real question
In 2015, GE laid out how it will exit the financial services arena, realign its industrial business with Alstom, and stoke long-term earnings growth. It also dealt with a volatile and sluggish global economy, which continues to weigh on performance. During the first nine months of 2015, three of GE's seven industrial segments experienced an annual revenue decline, with the worst being oil and gas.

Essentially, for 2016 to be GE's best year in its over 120-year history, it's going to have to execute flawlessly across its segments, massive transformation, and industrial restructuring -- all while it continues to operate in a challenging global growth environment. All things considered, it's probably a tall order to say that 2016 will be GE's best year yet.

To be clear, though, that's not to say GE's stock won't have another fantastic year. If the company continues to deliver on its promises to investors without delay and most of its industrial segments increase profitability, it may be another solid year for the stock.