Department store stocks were largely a disappointment in 2015. Retailers in general had a tough time, with the SPDR S&P Retail ETF (NYSEMKT:XRT) down about 10%, but the major department stores fared far worse. Macy's (NYSE:M), Nordstrom (NYSE:JWN), and Kohl's (NYSE:KSS) all saw their stocks tumble during 2015, vastly underperforming both the market as a whole and the retail ETF. 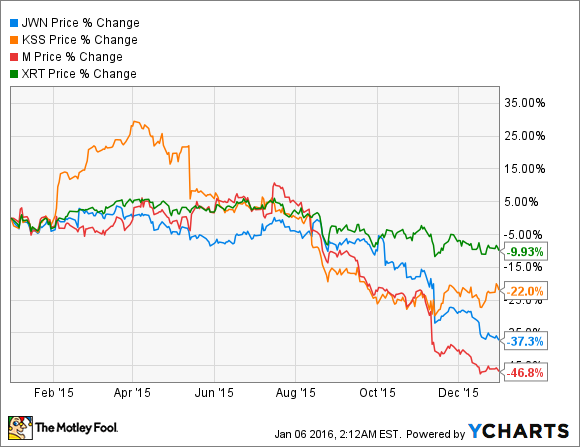 Unseasonably warm temperatures across the United States over the past few months negatively affected sales of winter clothing, forcing some retailers to steeply mark down winter wear. Macy's, for example, advertised 70% off men's sweaters in December, while Kohl's slashed the price of puffy jackets by 60%.

Beyond the weather, here's a look at why these three department store stocks had such a rough 2015.

Macy's
Shares of Macy's, the largest department store by sales, fell by a whopping 46.8% during 2015, with the drop occurring entirely in the second half. After years of posting strong comparable-store sales growth and rising operating margins, these trends quickly reversed themselves during Macy's second and third quarters.

During the second quarter, Macy's reported a 1.5% drop in comparable-store sales, along with an 20% drop in earnings per share. During the third quarter, comparable-store sales slumped by 3.6%, while earnings per share tumbled 41%, in part due to an asset impairment charge. Macy's also slashed its earnings guidance for 2015, with the company now expecting EPS to be between $4.20 and $4.25, down from previous guidance of $4.70-$4.80. This new guidance, however, includes gains from real estate sales. Backing out these gains, EPS for 2015 should be roughly $3.60. Macy's is expected to report its fourth-quarter results in late February.

Given the sharp cut in guidance, it's no wonder that investors punished the stock so severely during 2015. At the moment, Macy's stock trades at just about 10 times its adjusted EPS guidance of about $3.60 per share, suggesting that investors aren't expecting much growth from Macy's anytime soon. The company announced a series of steps in an effort to turn things around, including investing in e-commerce, closing some stores, and cutting costs, but the market is no longer pricing Macy's like a growth stock.

Nordstrom
The upscale Nordstrom only operates about 320 stores, including 194 Nordstrom Rack locations that offer discounted prices. Despite its smaller size, Nordstrom generated about $14.2 billion in revenue over the past 12 months, a bit more than half of Macy's revenue. Macy's operates about 900 total stores across all of its brands, nearly three times as many as Nordstrom.

A big part of the 37.3% decline in Nordstrom's stock occurred following the company's third-quarter earnings report in November. Nordstrom missed analyst estimates for both revenue and earnings, posting just 0.9% comparable-store sales growth, a significant slowdown compared to the 4.8% growth reported during for the second quarter. Nordstrom also slashed its guidance for the full year, lowering its comparable-store sales outlook to 2.5% to 3%, and cutting its EPS estimate to $3.30 to $3.40. In fiscal 2015, which ended in January, Nordstrom reported EPS of $3.72.

Nordstrom pointed to soft sales trends that were consistent across channels and merchandise categories, so the problems at the retailer go beyond the unusually warm weather. Nordstrom still trades for around 14.4 times its trailing-12-month earnings, a higher multiple than Macy's has been afforded, but the market is no longer as certain of the company's long-term growth prospects, especially with earnings set to decline in 2015. Nordstrom is expected to report its fiscal fourth-quarter earnings on Feb. 18.

Kohl's
Shares of Kohl's were hammered throughout the year, dropping steeply on multiple occasions after an initial rise during the first three months of 2015. The stock fell by 22% during the year, driven by weak earnings reports during May and August. Kohl's third-quarter report in November was better, sending to stock higher, but at that point the damage had been done.

Kohls reported mixed first-quarter results in May, missing revenue estimates but beating earnings estimates. Comparable-store sales rose by 1.4%, but the weaker-than-expected sales sent the stock tumbling. Kohl's second-quarter report in August was far worse, with the company coming up short of expectations for both revenue and earnings, while reported comparable-store sales growth of just 0.1%. The company blamed a shift in sales in states with tax-free holidays from July to August, but investors weren't buying it.

The stock continued to sink until Kohl's reported positive third-quarter results in November, beating analyst estimates for both revenue and earnings with comparable-store sales growth of 1%. Sales at the end of October were strong, offsetting weaker sales in September, and the stock partially recovered on the news. Following the weak third-quarter reports from both Macy's and Nordstrom, however, pessimism has been affecting all department store stocks, and Kohl's will need to put up solid holiday sales numbers in order to win back investors. Kohl's is expected to report its fiscal fourth quarter earnings on Feb. 25.