Please ensure Javascript is enabled for purposes of website accessibility
Log In Help Join The Motley Fool
Free Article Join Over 1 Million Premium Members And Get More In-Depth Stock Guidance and Research
By Evan Niu, CFA – Jan 7, 2016 at 10:30AM

Apple CEO Tim Cook opted to align his interests with shareholders years ago, and it could potentially cost him millions.

It's the turn of the year, which means that market headlines are full of all sorts of annual statistics. That includes the fact that Apple (AAPL 2.56%) actually underperformed the broader market in 2015. The Mac maker fared worse than any of the three major indexes, notably including the tech-heavy Nasdaq Composite as fellow tech peers put up better gains on average. 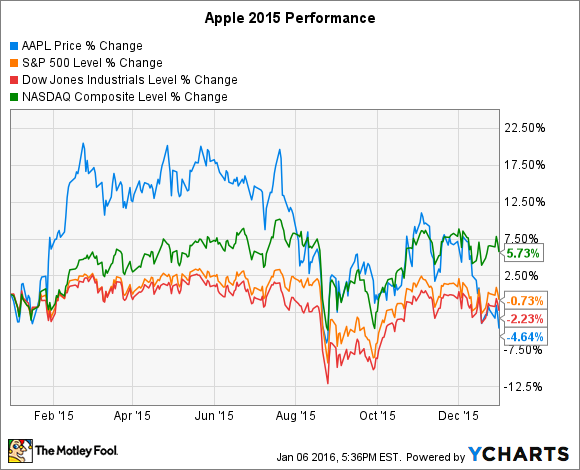 December was a particularly rough month for Apple, as that was when it gave up most of its gains and modest year-to-date outperformance, mostly as investors worried about the very real possibility that iPhone unit sales may decline for the first time ever. Still, if Apple continues to underperform for the next eight months, CEO Tim Cook stands to lose quit a bit.

Doing what's right for shareholders
You might recall that way back in 2013, Cook voluntarily chose to modify the massive grant of restricted stock units that he received in 2011 upon becoming CEO. He received 1 million RSU shares under the 2011 award, and these were initially only time-based awards that would continue to vest as long as Cook stayed with the company. The modification effectively converted a large portion of these shares to performance-based awards where tranches would only vest if Apple met certain criteria.

This modification only has the potential to be negative for Cook, and there was no upside possibility to the change for his compensation. Cook & Co. felt that it was the right thing to do to enhance corporate governance, and Cook asked the board that his 2011 award and all future equity awards be subjected to performance criteria.

Here's a section from the relevant SEC filing from 2013:

Under the adopted modification, Mr. Cook will forfeit a portion of the 2011 CEO equity award, which was previously entirely time-based, if the Company does not achieve certain performance criteria. While the Committee generally believes that a performance-based award should have both a downside and an upside component, at Mr. Cook's request, the modification does not contain an upside opportunity for overachievement of these criteria. As a result of implementing a modification with only downside risk, the Committee has determined that a portion of the original grant should vest earlier than originally scheduled. This modification will not change the award's original value for accounting expense purposes.

One tranche vested fully just a few months ago in August, after Apple scored within the top third (its relative TSR of 76.8% placed it in the 90th percentile of the 458 included comparable companies). But Cook has another tranche coming up in August 2016, and considering Apple's dip over the past month and the current pervasive investor pessimism around iPhone order cuts (which is probably just noise anyway), the executive could potentially have a lot at risk.

Apple's lead is shrinking
Apple has just filed its proxy statement ahead of its upcoming annual shareholder meeting, and the relevant measurement period for the August 2016 tranche is Aug. 25, 2013 through Aug. 24, 2016. It's not clear precisely which specific companies are included in the comparison, but it is the majority of the S&P 500.

Here's how Apple has performed thus far in this measurement period: 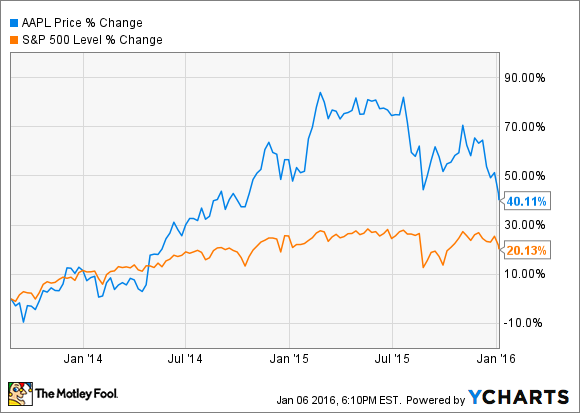 During early 2015, Apple was handily beating the market, but the latter half of the year was not kind and the outperformance gap for the period has closed quite a bit. Apple's cheap valuation usually doesn't do it too many favors, since it's an emotionally loaded stock that's popular with traders. Even if fiscal first-quarter earnings (due out later this month) are fundamentally solid in terms of earnings power and cash flow, negative sentiment could still persist if iPhone unit sales underwhelm investors.

But depending on how peers do, Cook could miss out on some of those shares. The good news is that from a corporate governance perspective, his interests are quite aligned with investors, which was the whole purpose of the modification in the first place.