Williams Companies (NYSE:WMB) took its investors on a wild ride in 2015: 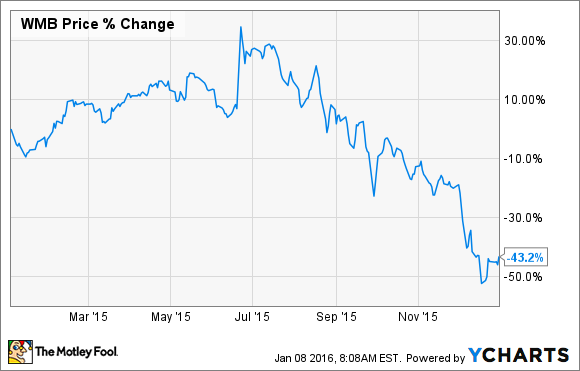 That's largely due to the company spending most of the year deciding between two very different strategic paths. It was company's initial rejection of the path it ultimately chose that led to some pretty bad moves in hindsight.

In May of last year Williams Companies announced that it had reached an agreement to bring its MLP Williams Partners (NYSE: WPZ) under its corporate umbrella. The $13.8 billion stock-for-unit deal was expected to simplify its corporate structure, enhance the combined company's growth prospects, and enable Williams Companies to grow its dividend by 10% to 15% annually through 2020.

All things considered, it was a pretty good deal and was part of a growing trend within the sector whereby C-Corp general partnerships were acquiring their MLP affiliates. That said, there were two aspects of this particular deal that were less than ideal. First, Williams Companies agreed to pay Williams Partners a break-up fee of $428 million if it terminated the merger agreement, which is a fee that would come back to bite the company because it terminated the merger agreement in late September triggering that fee. Further, it was later revealed that the main reason why Williams Companies had sought to combine with Williams Partners wasn't to create value, but to ward off a rival that had been seeking to acquire Williams Companies.

Resisting the best path for too long
It's that initial resistance to its rival's overtures that was the company's other bad move last year. In late June it was revealed that a rival midstream general partnership had made several attempts over the past six months to engage in a friendly dialog with Williams Companies' management over a proposed merger. Then, when Williams Companies announced its formal merger agreement to acquire Williams Partners this rival sent letters to Williams Companies board to bring its interest in acquiring the company to their attention. It then went directly to investors by announcing that its initial offer was an all-equity transaction that valued Williams Companies at $53.1 billion.

This direct approach was also initially resisted, though it did force Williams Companies to undertake a strategic review. However, as a result of that review, Williams Companies realized that its strategic plan to acquire Williams Partners wasn't the best approach. Instead, it concurred that combining with this rival was the better path to take. Unfortunately, by the time the deal was signed the equity value of both companies had slumped resulting in Williams Companies being valued at just $37.7 billion. Further, Williams Companies required a cash portion to agree to the deal instead of the original all-equity transaction. This move necessitates the combined company to take on an additional $6 billion in debt to pay that cash to investors. That will increase the leverage of the company at a time that there are growing concerns with leverage within the energy sector. Not only could this move come back to burn the company in the future if the downturn persists and a credit crisis in the sector unfolds, but Williams Companies investors will miss out on some of the future upside of the combined entity by trading their stock for cash.

Investor takeaway
Williams Companies spent the entire year resisting a merger and even went out of its way to merge with an affiliate in an attempt to fight the deal. That move cost the company more than $400 million while its negotiating tactics failed to result in a higher offer because it was forced to negotiate at a time when midstream valuations were cratering. Both moves cost Williams Companies investors a lot of money in 2015.