Please ensure Javascript is enabled for purposes of website accessibility
Log In Help Join The Motley Fool
Free Article Join Over 1 Million Premium Members And Get More In-Depth Stock Guidance and Research
By Reuben Gregg Brewer - Jan 9, 2016 at 11:45AM

It was a bad year for Alliance Resource Partners in 2015, but that doesn't mean there weren't some bright spots.

Alliance Resource Partners (ARLP -0.18%) watched its limited partner units crater throughout 2015. It was a brutal year in many ways. However, that doesn't mean there wasn't some good mixed in with the bad. Here are two of Alliance Resource's best headlines in 2015, and another that's bad, but perhaps in a good way.

Getting stronger
One of the key things that has set Alliance apart from its coal-mining peers is how well it's bucked the coal industry downtrend. There's two main reasons for that. First, Alliance is focused on the Illinois Basin coal region. Coal from the Illinois Basin has been taking market share away from coal provided by other key mining regions. So, despite a general decline in coal demand, Alliance's coal continues to be desired by customers.

That sets up the second reason Alliance has remained profitable while others, such as Peabody Energy, have bled red ink and eviscerated their dividends. (It's worth noting that Peabody is one of the stronger companies, Alpha Natural Resources fell into bankruptcy earlier this year, and Arch Coal looks like it's teetering on the edge of insolvency.) All have been cutting back production and streamlining operations. But not Alliance. Because utilities still want its coal, it's been able to increase production and, thus, offset much of the pain from falling coal prices. 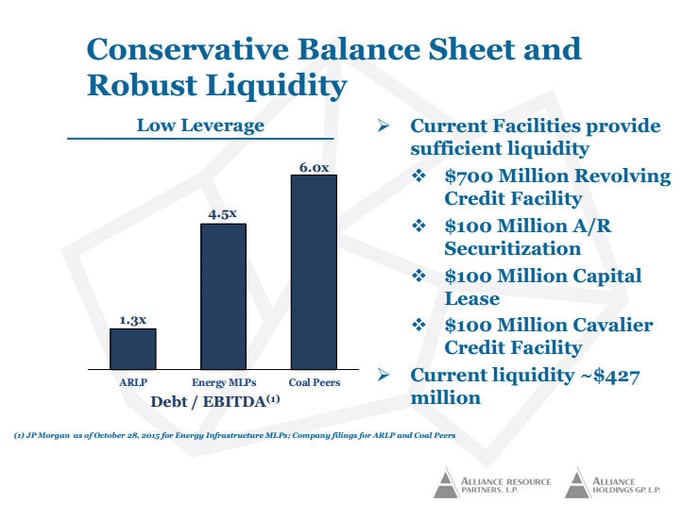 Which means that Alliance is in better shape than most of its peers. And, thus, it was able to pick up coal supply agreements from bankrupt Patriot Coal. Although the numbers aren't huge, Alliance was able to bolster its contracted sales by 3.7 million tons through 2017. It also added some equipment and coal reserves. In other words, Alliance's strong finances and industry position allowed it to pick at the bones of its competitors.

It's position of strength also allowed it to buy the half of the low-cost White Oak Mine that it didn't own. This is a $50 million deal that increases the partnership's flexibility in the current market and provides it with an opportunity to expand production down the line. Alliance believes there's as much as $18 million in annual cost savings that it can achieve, too, so the purchase price seems pretty small looked at over the long term. But the benefits are many.

So those are the two best headlines for Alliance Resource Partners in 2015. Both were possible because of the partnership's conservative financial position and continued strong results. Which brings us to the bad-news-is-good-news headline.

The third-quarter turn for the better?
By far one of the worst headlines for Alliance in 2015 was this one: "Alliance Resource Partners, L.P. Reports Quarterly Financial and Operating Results, Declares Quarterly Cash Distribution of $0.675 Per Unit." On the surface that seems pretty pedestrian, but this was the first time since mid-2008 that the partnership didn't increase its quarterly distribution. That's a telling statement that gets worse when you read the release and find that CEO Joseph Craft basically said that the coal industry is in such a rough state right now that Alliance will start looking at curtailing its own production -- something it hasn't had to do up until this point.

Alliance has been working hard to get better and grow. Source: Alliance Resource Partners.

How is that good? Over the near term, it isn't. If Alliance sells less coal it will make less money. But, looked at with a bigger-picture view, it suggests big coal could finally be at the point where even the best companies start to pull back. That's backed by the string of bankruptcies cluttering the coal news headlines. Alliance, a survivor in a tough coal market, could soon see some light at the end of the tunnel if supply and demand start to balance because the industry has hit the point of capitulation. That's putting a positive spin on things, but it says a lot about what's going on when the best players start to feel some pain.

A bad year
It would be hard to sit here and suggest that Alliance Resource Partners has had a good 2015. It hasn't, and its unitholders have borne the brunt of the pain. But that doesn't mean this industry leader hasn't been working hard to make itself a better player despite the industry's malaise. And even in what might be the year's worst bit of news, there's a potential silver lining -- this downturn won't last forever and Alliance sure appears to be planning to arrive on the other side a stronger company.