Please ensure Javascript is enabled for purposes of website accessibility
Log In Help Join The Motley Fool
Free Article Join Over 1 Million Premium Members And Get More In-Depth Stock Guidance and Research
By Jeremy Bowman - Jan 9, 2016 at 6:22AM

Shares of the review service spiked as the business finally turned profitable.

What: Though the stock has struggled in its relatively short history as a publicly traded company, 2015 was a banner year for Angie's List Inc (ANGI) as the stock jumped 51%, according to data from S&P Capital IQ. As the chart below shows, the stock soared throughout the second half of the year, jumping from a low of $3.73 to more than $9. 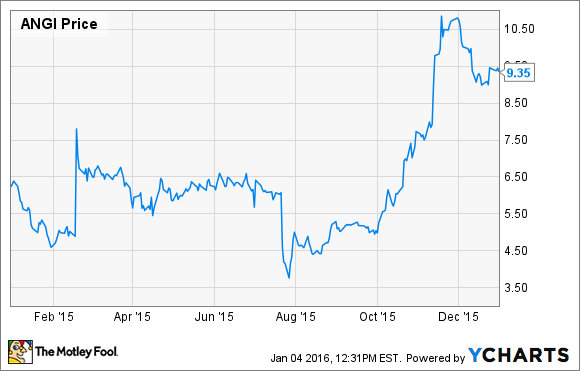 So what: After an unremarkable first half of the year, Angie's List stock fell 25% on July 22 when it posted a disappointing earnings report that included declining membership revenue. The stock gradually recouped those losses over the next three months and then soared after it delivered its first-ever third-quarter profit in October. The summer months are generally a slow period for the subscription-based review site, but investors were impressed by solid improvements across the board including 7% growth in revenue, and the bottom line flipped a $5.2 million loss to a $0.1 million profit.

Following that, the stock rose in November when the company received an unsolicited buyout offer from IAC/Interactive Corp. (IAC). The media company offered to acquire Angie's List for $8.75 a share. The stock soared above $8.75 a share, and Angie's List's board unanimously voted against the buyout offer, claiming that the original 10% premium it implied was too low. The stock had been pumped in preceding months in part due to buyout speculation, however. Angie's List reached an intraday trading high of $11.25 on Nov. 25, but the stock slipped in December as no subsequent buyout offer came through.

Now what: Looking ahead to 2016, the company finally seems to have reached consistent profitability. Analysts expect it to finish out 2015 with a $0.20-per-share profit and grow that this year to $0.30 a share. Considering the momentum from the turnaround and profit growth and the acquisition interest by outside parties, 2016 could be another strong year for Angie's List.