Please ensure Javascript is enabled for purposes of website accessibility
Log In Help Join The Motley Fool
Free Article Join Over 1 Million Premium Members And Get More In-Depth Stock Guidance and Research
By Jeremy Bowman - Jan 9, 2016 at 10:04AM

The DIY soda-maker showed no signs of rejuvenation in 2015.

What: Shares of countertop soda-maker SodaStream International (SODA) continued to lose their fizz last year, falling 19%, according to data from S&P Capital IQ. The effects of 2014's inventory buildup and muted demand continued to push shares lower, as the chart below shows. 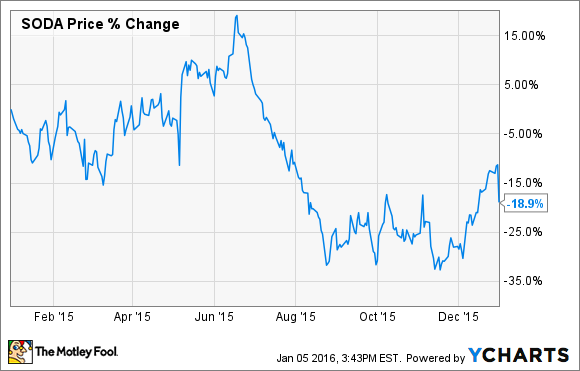 So what: The broken growth stock took its biggest hit this summer as shares fell 15% in July, though there was little news out to explain the drop. A bearish sentiment seemed to sweep the market as investors became increasingly frustrated with the lack of progress in the turnaround. The stock had briefly spiked earlier as CEO Daniel Birnbaum said he didn't expect much competition from the Keurig Kold, the new drink-maker from Keurig Green Mountain.

SodaStream has spent the year focused on rebranding itself as a sparkling water-maker rather than a soda-maker as management noted declines in soda consumption and the health benefits of sparkling water as opposed to soda. The company has rolled out new products and marketing to support the transition, but the new branding has yet to take hold with consumers.

Taking a look at the whole year, it's easy to see why the stock dove. For the first three quarters of the year, revenue fell 21% while EPS is expected to fall from $1.31 a share to $0.97. The stock got a boost toward the end of year on buyout rumors from Pepsico (PEP -0.06%) and as shares were listed on the Tel Aviv Exchange, but those can't be counted on for long-term gains.

Now what: A pop in SodaStream like the one we saw following its IPO is unlikely to come soon. Analysts are expecting only a slight uptick in revenue this year, while profits are expected to fall. The transition to a sparkling water brand could succeed, but SodaStream needs to do the hard work of developing retail partners to stock its flavors and offer carbonator exchanges. In the U.S. especially, it has simply been too difficult for consumers to exchange canisters, which has contributed to the attrition rate. If the company can win over supermarkets and other such conveniently located places that consumers regularly visit, sales should improve and the stock should find new life.