If you are at or getting close to retirement age, you should be on the hunt for companies with solid long-term prospects, strong competitive advantages, and great management teams.

To aid you in your search, we reached out to our team of Motley Fool contributors and asked them to share their top retirement stock ideas for the year ahead. Read below to see which companies they singled out as great buys today.

Dan Caplinger: Retirees will remember well how Intel (NASDAQ:INTC) became one of the biggest beneficiaries of the PC revolution in the 1980s and 1990s, with its microprocessor chips becoming the standard and taking commanding market share in the computer industry. Investors could count on nearly every desktop machine having an Intel chip inside it, and the inexorable march toward greater technology use boded well for the company.

Since then, Intel has fallen behind somewhat, failing to jump onto the mobile bandwagon by taking its leadership position in PC chips and translating it to successful mobile-chip offerings. Yet more recently, the company has started to correct its strategic mistake, making advances in the mobile arena and seeking to carve out a viable niche it can serve.

The purchase of Altera will add programmable-chip technology to its arsenal, allowing Intel to find new speed advantages that rivals could have difficulty trying to match. At the same time, Intel is also moving forward with its server and desktop business, looking for ways to help users across the globe find the best and most cost-effective solutions for their technology needs. With a dividend yield approaching 3%, and with shares trading at just 14 times trailing earnings, Intel has promise for retirement investors seeking stability with some potential for growth.

Brian Feroldi: You wouldn't think the biotech sector would be good hunting ground for a retirement stocks, but not all biotechs are created equally. For example, Amgen (NASDAQ:AMGN) has grown into a biotech blue chip over the past few decades and is now so large, with such a diverse revenue base, it might actually be a solid choice for shareholders with a low tolerance for risk.

Amgen boasts a huge stable of drugs that produce billions in cash flow, and it just added six new drugs to its lineup over the past year. Two of those new drugs -- Kyprolis, which is designed to treat multiple myeloma and Repatha, a new cholesterol-busting medication -- look particularly exciting as they each hold blockbuster potential.

Beyond its new approvals, the company also boasts a large pipeline of drugs in late-stage trials, and Amgen is making a big push into biosimilars -- which are like generic versions of biologically derived drugs -- which should serve as another avenue for growth down the road. Combine this with the fact that the population is getting older each year, and Amgen's revenue and profits should continue moving in the right direction over the coming years.

Amgen is also quietly becoming a nice income play for retirees. The company just hiked its dividend by a strong 27% recently, and shares currently yield 2.65%, which is higher than the market average. With shares currently trading for under 15 times its expected 2016 earnings, it's hard to call its shares expensive right now, too.

While Amgen's size will prevent it from putting up huge growth over the coming years, it should provide investors with a good mix of growth and income, making it a solid choice for a retirement stock.

Matt Frankel: There are some important things to look for in a retirement stock -- a solid and growing dividend, low debt, and a low-risk business model, to name just a few. One company that meets all of the requirements and then some is Public Storage (NYSE:PSA).

With more than 2,200 facilities, Public Storage is by far the leader in this highly fragmented industry, and it's actually larger than its next four competitors combined. Not only does this mean there is room for growth by acquisitions, but the industry trends point toward higher demand in the future. Simply put, Americans accumulate a lot of "stuff," and they need a place to put it. In fact, the portion of the population that rents a storage unit has grown by 58% over the past 20 years.

With virtually no debt, Public Storage isn't vulnerable to rising interest rates, and it should have an easy time remaining profitable if the economy turns sour. In fact, the company needs just 30% occupancy to break even (occupancy currently stands at about 90%).

Public Storage has produced an impressive 17.8% average annual total return over the past 20 years, so it's safe to say the business is profitable enough without taking on debt. To put this in perspective, consider that the company's overall return was nearly seven times that of the S&P 500 over the past two decades. 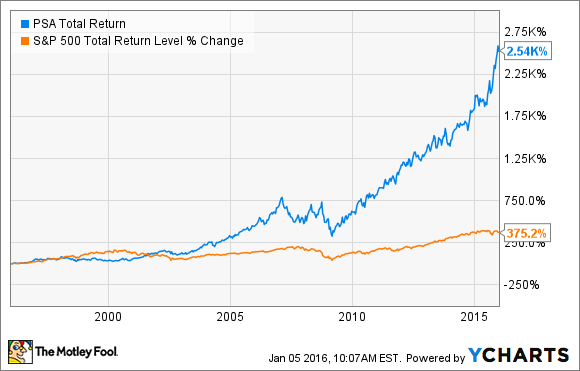 Finally, Public Storage pays a respectable 2.8% dividend yield that has grown by an average of 12% per year over the past decade. The company is a strong retirement investment, with the added benefit of market-beating growth potential.

Sean Williams: Everyone's definition of a great retirement stock differs, and mine involves a company that can deliver a complete payback via dividend in a little more than a decade: HCP (NYSE:PEAK).

As the world's population ages and the demand for healthcare grows, my thesis is that taking advantage of growth in the healthcare industry is going to be a wise move for pre- and post-retirees. But, because the healthcare industry requires high levels of reinvestment into research and development, it often leaves little room for a healthy dividend -- and a superior dividend is often the mark of a great retirement stock.

HCP isn't your typical healthcare company. It's a real estate investment trust that has a burgeoning portfolio of assets that it leases to companies in the healthcare industry. This includes hospitals, skilled nursing, and senior housing facilities, medical office buildings, and life science properties. As the demand for drug development, senior housing, and medical care in general rises, the leasing power of HCP rises with it. The only true risk for a company like HCP is ensuring that it has the capacity to meet its debt obligations. Buying property isn't cheap, and HCP boasts around $11 billion in net debt at the moment.

However, with HCP, you get a company that's actually raised its dividend in each of the last 30 years, making it the only REIT that's also a Dividend Aristocrat, and you get a current yield of 5.9%, which is going to trounce any CD or Treasury bond out there. That's the definition of a long-tail growth opportunity and a great retirement stock.