What: 2015 was a rough year to be a shareholders of TetraPhase Pharmaceuticals (NASDAQ:TTPH). All was going well until September, when the company released disappointing clinical news related to its lead compound, causing shares to plunge. The stock ended up losing 74% of its value during the year, according to data from S&P Capital IQ. 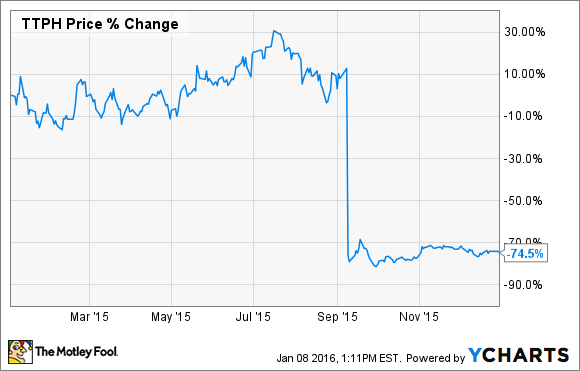 So what: Results from the company's Phase 3 IGNITE2 clinical trial that did the company in. The trial was testing the company's next-generation antibiotic, called eravacycline, and its ability to treat complicated urinary tract infections. Although the drug performed well in earlier trials, it was unable to show statistically significant non-inferiority when compared with levofloxacin, a currently available generic antibiotic.

Given that so much of this clinical-stage biopharma's value was tied to the future of eravacycline, the news sent shareholders heading for the exits en masse.

Now what: Sometimes bad things happen to even the most promising of clinical-stage biopharma companies. Just ask shareholders of Chimerix (NASDAQ:CMRX), another company that had a dreadful year. Chimerix announced that its lead compound, called brincidofovir, missed its primary endpoint in a pivotal phase 3 study, causing shares to plunge 80% in a single day.

Stocks such as Tetraphase Pharmaceuticals and Chimerix should act as a reminder to all small-cap biopharmaceutical investors they are taking huge risks when they put money to work in these names, and that sometimes things can go very badly. It's for that reason that I continue to believe that if you choose to play in this arena, you diversify your holdings so that each company only represents a tiny amount of your total portfolio. That way you can live to play another day if something goes horribly wrong.