Shares of Southwestern Energy Cmpoany, Whiting Petroleum Corp., and Denbury Resources Inc. all moved 10% thanks to some analyst getting around to cutting outlooks and Denbury trying to push though a new debt deal.

What: Another day, another wild energy market that saw shares of multiple oil and gas producers decline by more than 10% today, with Southwestern Energy (SWN 3.04%), Whiting Petroleum (WLL), and Denbury Resources (DNR) all fell by at least 10% as of 3:30 p.m. ET today.

So what: The first thing to remember when talking about 10% moves by all three of these companies is that all three have seen their shares lose more than 85% over the past 18 months, so even a small news announcement on any given trading day as of late will send shares moving on pretty large swings. 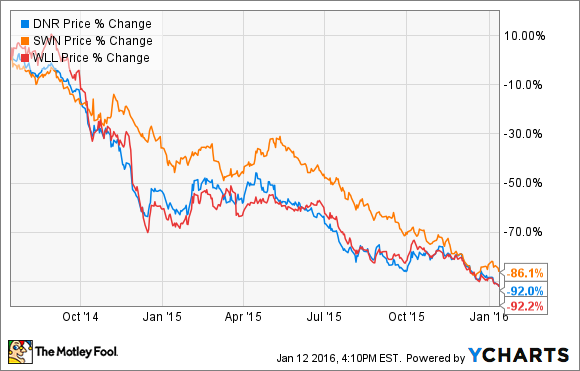 If the massive drop in share prices wasn't enough of an indication that shares of Southwestern and Whiting were not performing to the same level as the S&P 500, two analyst firms decided to remind us today that they aren't outperforming the market. Morgan Stanley lowered its rating on Whiting from "underweight" from "equal weight" after citing that it thinks oil prices are going to remain weak for much of 2016. Barclays also weighed in on Southwestern's stock from "overweight" to "equal weight," saying that low oil gas prices have weighed on the company's stock.

Denbury Resources' shares took a wild ride today as well, after the company announced that it was making its debt swap offer more attractive to potential buyers. It's trying to trade in several of its subordinated debt notes in exchange for senior notes due in 2022. To make the deal happen, the company raised the interest rate on those senior notes to 7.5%. The reason it wants to trade long-term notes for senior notes with a similar termination date and a higher interest rate is that there are certain debt covenants tied to the existing subordinated notes, and to get out from under those covenants it needs to sweeten the pot for those investors.

While that doesn't sound like a huge deal, investors are a little worried that it can't seem to get the debt deal done because there is such a lack of interest in these debt notes. Longer term, though, investors should be slightly concerned that the company will see some higher interest rates over the next six years if this debt swap does go through.

Now what: I don't think anyone really needed an analyst note to let them know that the price of oil and gas has negatively affected the share prices of both Whiting Petroleum and Southwestern Energy. One might even question what the heck it took the two analyst teams so long to come to that conclusion. For anyone who's invested in Whiting or Southwestern or is watching them closely, these analyst reports don't really mean much and should be taken with a grain of salt.

For investors in Denbury, this debt swap isn't exactly a investment thesis-changing type of event, but it's enough that it should perk your ears up and see how it plays out. Getting out from under those debt covenants could give it some more wiggle room since oil prices could stay low for a while, as long as it doesn't need to give away the farm in the form of high interest rates to make it happen.

The Motley Fool owns shares of Denbury Resources. Try any of our Foolish newsletter services free for 30 days. We Fools may not all hold the same opinions, but we all believe that considering a diverse range of insights makes us better investors. The Motley Fool has a disclosure policy.