No specific news drove the decline on Tuesday, but here's why the stock has been tumbling for the past two years.

What: Shares of Interactive Intelligence Group (ININ), a provider of contact center automation, unified communications, and business process automation software and services, slumped on Tuesday on no company-specific news. At 2:45 p.m. ET Tuesday, the stock was down about 12%.

So what: Shares of Interactive Intelligence have been slumping since the stock peaked in the beginning of 2014. After going as high as about $80 per share, the stock has tumbled in fits and starts, with Tuesday's decline being the latest downward movement. The stock is now dropped roughly 70% from its multiyear high. 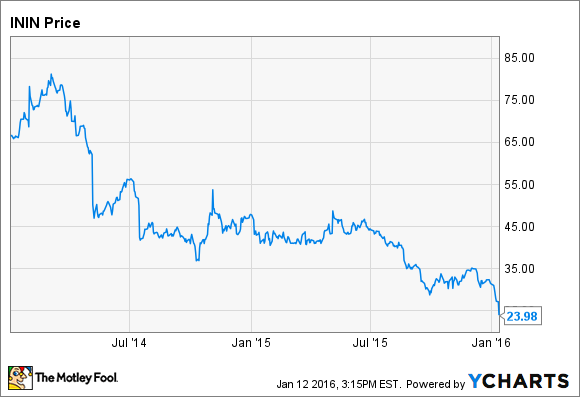 While Interactive Intelligence's revenue has been growing, increasing by about 7% in 2014, profitability has collapsed. Net income fell from a gain of $10 million in 2013 to a loss of $41 million in 2014, and over the trailing-12-month period, the company has posted a net loss of $48 million. From 2005 through 2013, it never reported an annual loss.

A shift to cloud-based subscription revenue, which pushes revenue recognition out into the future while booking the costs associated with gaining that revenue today, is partly responsible for this slumping profitability. While the drop in the stock price on Tuesday doesn't seem to be driven by anything specific, the market has been losing confidence in the stock for the better part of two years.

Now what: Any transition to subscription revenue is going to hurt profitability in the short term, and while a tumbling stock price is never a pleasant thing to deal with, long-term investors should be focused on the fundamentals. During Interactive Intelligence's latest quarter, the number of new cloud customers rose by 40% year over year, and the company cited robust add-on sales to existing customers as well. While falling licensing revenue is counteracting rising recurring revenue and hurting profits in the short term, Interactive Intelligence's strategy is focused on the long term.

Timothy Green has no position in any stocks mentioned. The Motley Fool recommends Interactive Intelligence. We Fools may not all hold the same opinions, but we all believe that considering a diverse range of insights makes us better investors. The Motley Fool has a disclosure policy.