Please ensure Javascript is enabled for purposes of website accessibility
Log In Help Join The Motley Fool
Free Article Join Over 1 Million Premium Members And Get More In-Depth Stock Guidance and Research
By James Sullivan - Jan 12, 2016 at 10:11AM

After tumbling in 2015, will shares of Twitter and GoPro rebound this year? 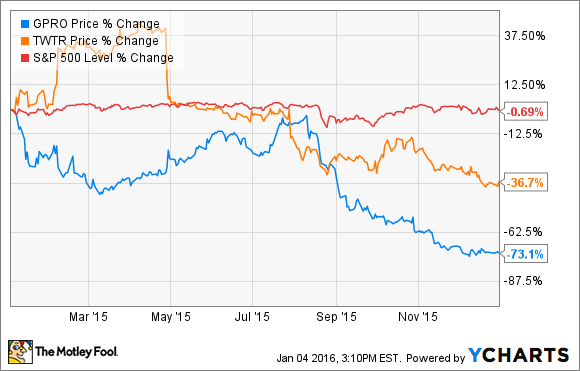 Drones and Periscope
GoPro is banking on the release of its quadcopter drone named Karma, which should come out this year. The Drone market is new and there isn't an entrenched company that GoPro must compete with. Existing consumer drones that are similar in quality to what GoPro is producing -- DJI is the closest comparable and is not a well known brand name -- are expensive. It's hard to imagine a lot of people spending over $1,000 on one as a gift.

Hobby users, similar to model aircraft pilots, might buy some, but I don't think that's where the big money is going to be made. The largest purchasers of these high-end drones will be businesses for delivery, security, surveying, and farming, among other things. A fleet of drones that costs a business $10,000 may be an easy purchase if it saves $20,000 worth of labor costs.

GoPro is a cheap stock. It has over $500 million in cash and no debt, yet trades at a reasonable 16 times expected 2016 earnings. But the company is weighed down by worries about the sustainability of its camera business. Success with its drone launch will go a long way toward quelling fears that it's a one-trick pony. If it succeeds here, the stock in 2016 should see a nice bounce higher from both increased earnings and valuation expansion. 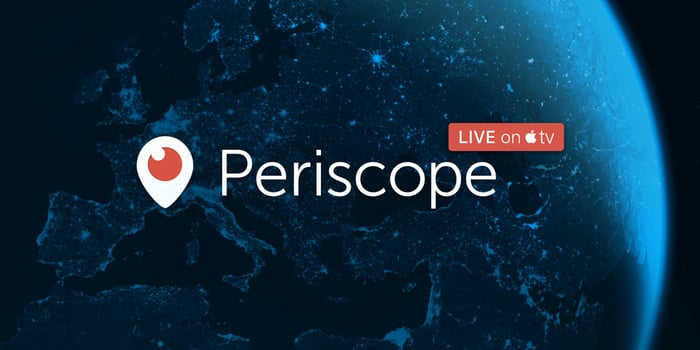 Meanwhile Twitter's offering, Periscope, which allows users to live stream a video feed, could help revitalize the company's ailing stock. It's the 17th most downloaded social media app in Apple's App Store, and serves as a logical extension of Twitter's platform. Citizen journalism, sporting events, and personal connections between celebrities and fans can all be enriched and improved through Periscope.

Early Twitter investor Chris Sacca thinks that when the time comes it will be easy to turn this app into a moneymaker. "Periscope may prove to be the most important deal Twitter has ever done," he wrote in a letter to the company and its investors.

Ultimately when the time comes to monetize Periscope (which I agree is not yet), the easiest path will be to place very short/Vine-length ads just before the playback of archived broadcasts. There is absolutely no need to place ads into a livestream and interrupt the user experience. The archived video playback alone will generate incredible cash-flow in addition to being perfect for search results and a huge honeypot for attracting new users. Beyond that, Periscope will also be able to do promoted broadcasts and promoted accounts just like within the Twitter model.

How this effects Twitter stock in 2016 will depend in part on how investors view the progress of these efforts. If growth continues and it becomes clear that Periscope is a profitable part of Twitter's future, we could see the stock rebound.

Downside protection and the long-term
Any stock can go to zero, but Twitter and GoPro each have characteristics that make this seem unlikely. Both have more cash than debt on their balance sheets, which will help them survive lean times. They also have strong brands that make success more likely while also making it easier for management to sell to a larger company if called for.

GoPro would be appealing to any tech giant looking to use its camera technology in other devices, build upon its YouTube channel and media presence, or get a head start in the fledgling market for drones.

Twitter has become a part of modern life. Even if you don't have an account or check the site, you're still likely influenced by information coming from users. Twitter has forever changed how people present breaking news in politics, global events, sports, and other areas. It's thus hard to see it going the way of the Dodo bird.

Twitter's market cap is about six times as large as GoPro's, making it a tougher pill to swallow, but it would add value to Apple, Alphabet, Facebook, or Microsoft. With a price tag (with premium) in the $20-30 billion range, the appetite for an acquisition is surely greater than when Twitter sported a market cap over $35 billion in early 2015.

No one knows more about the prospects of a company than those on the inside, and I trust management to make the best decision regarding keeping the company independent or putting it on the auction block. I have faith that management will do what's best for shareholders -- including CEO Jack Dorsey who remains one of the largest individual owners.

GoPro has a better chance of bouncing back than Twitter in 2016. A report of strong sales for their action cameras during the holiday season, a successful drone launch, and further evolution into a media company would show a stronger, more diverse company. It wouldn't be warranted having a P/E multiple below that of the overall S&P 500 and the stock would trade higher.

I expect Twitter shares to increase in value this year, but the real story will be played out over many years. Twitter has optionality with Vine, Periscope, other acquisitions, and Twitter itself. It's managed by the right executive team -- including co-founder Dorsey -- and its approximately $15 billion market cap belies its importance and place in the world.

I plan to hold my shares in both companies for many years, as I think both will outperform the market over the next decade.

Suzanne Frey, an executive at Alphabet, is a member of The Motley Fool's board of directors. James Sullivan owns shares of Apple, Facebook, GoPro, and Twitter. The Motley Fool owns shares of and recommends Alphabet (A shares), Alphabet (C shares), Apple, Facebook, GoPro, and Twitter. Try any of our Foolish newsletter services free for 30 days. We Fools may not all hold the same opinions, but we all believe that considering a diverse range of insights makes us better investors. The Motley Fool has a disclosure policy.