It was a good year for video games. 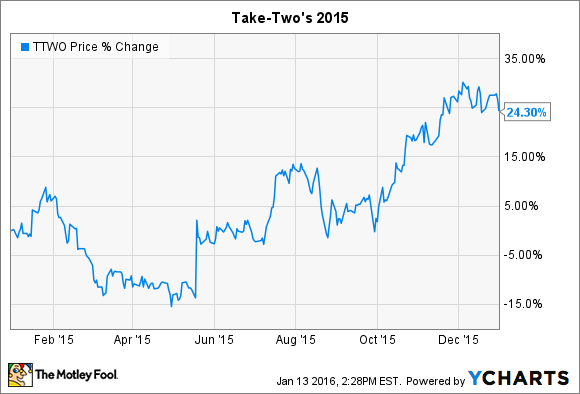 So what: Take-Two rode the same favorable industry trends that helped Activision log its record results in 2015. As the installed base of next-generation console devices grew, Take-Two's revenue spiked higher by 147% through the six months ended Sept. 30. The publisher capitalized on its growing gamer audience with hit releases in sports franchises like NBA 2K, along with steady demand for its Grand Theft Auto V blockbuster.

Because a growing portion of those sales are occurring online, Take-Two's profitability is rising as well: Gross profit margin is up to 46% from 42% a year ago. And downloadable content is helping video games become steady cash-generating properties -- rather than single, hit-driven profit events. NBA 2K16's online play and companion app, for example, helped recurrent spending on the title leap 120% higher. Similarly, Activision's management has credited "recurring digital monetization trends" as key drivers behind its latest growth.

Now what: Take-Two's upcoming release calendar includes several potential new hits to add to its established properties like Borderlands and WWE 2K. These include Battleborn, a shooter due out in May, and crime drama, Mafia III, which should launch in the Fall. It will be critical for the publisher to keep introducing successful new properties so that its results aren't completely tied to the reception of one massive title like Grand Theft Auto V.

Given major risks like that, will Take-Two outperform again in 2016? Consider that the company is valued at just 2.1 times last year's sales, a relative steal compared to Activision Blizzard's 5.3 times valuation. Sure, Take-Two doesn't boast nearly the portfolio, nor the sturdy profit history, that Activision does. But its family of brands is growing quickly, which could make the stock a good long-term buy for investors looking for cheaper exposure to the video game industry.