Please ensure Javascript is enabled for purposes of website accessibility
Log In Help Join The Motley Fool
Free Article Join Over 1 Million Premium Members And Get More In-Depth Stock Guidance and Research
By Jeremy Bowman - Jan 14, 2016 at 10:47AM

The online travel merchant took off in 2015.

What: Shares of Expedia (EXPE -2.43%) were gaining altitude last year, finishing up 46%, according to data from S&P Capital IQ. Thanks to continued acquisition, increasing consolidation in the industry, and improved earnings, the stock climbed steadily over the year as the chart below shows. 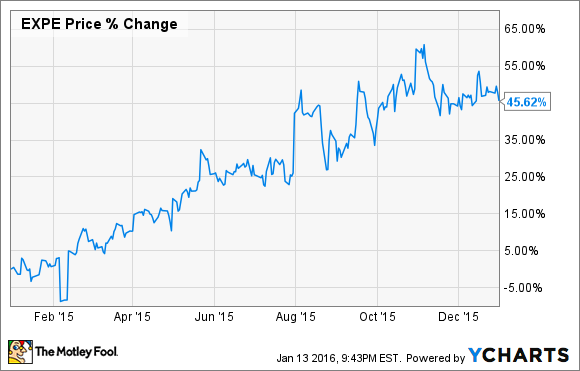 So what: The major news item that pushed the online travel agent was its acquisition of Orbitz. Expedia agreed to purchase its smaller rival for $1.6 billion, stepping up its battle with Priceline Group in the process.  The acquisition came just weeks after Expedia snatched up Travelocity for $280 million. Shares jumped 14% on the news as acquiring Orbitz gave the company an estimated 75% share of the U.S. travel industry. Rival Priceline stands out in the global market against Expedia's properties, but as the two have made essentially a duopoly out of the online travel industry, both stocks have thrived.

Expedia shares popped again on its first-quarter earnings report in May as bookings were better than expected. Hotel bookings jumped 32% and sales were up 14%, sending shares up 8% on the day.

The stock hit an all-time high later month as the company dumped its stake in Chinese travel merchant eLong, signaling its commitment to the American market.

Expedia flew past earnings estimates again in its second-quarter report and the stock jumped 14%, and the company finished with another strong earnings, though it fell back in December.

Now what: Expedia stock is down 15% thus far this year as the sell-off has affected growth stocks and last year's winners more than the rest of the market. Still, analysts expect EPS to jump by 50% as the company continues to benefit from the Orbitz merger and the further consolidation in the industry. If Expedia can deliver on those expectations, the stock should move higher from here.

Jeremy Bowman has no position in any stocks mentioned. The Motley Fool owns shares of and recommends Priceline Group. Try any of our Foolish newsletter services free for 30 days. We Fools may not all hold the same opinions, but we all believe that considering a diverse range of insights makes us better investors. The Motley Fool has a disclosure policy.