What: 2015 was a breakout year for Intra-Cellular Therapies (NASDAQ:ITCI) as the clinical-stage biopharma focused on treating diseases of the central nervous system saw its share price more than triple during the year, according to data from S&P Capital IQ. 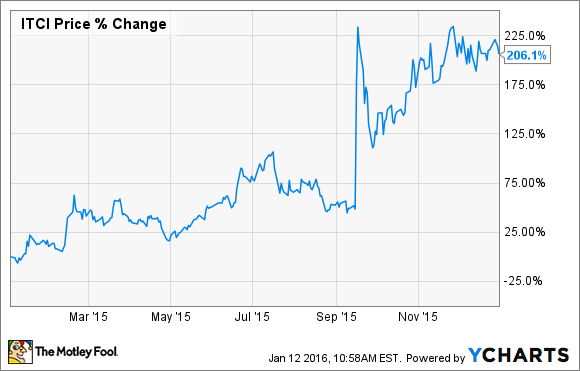 So what: Plenty of updates were provided during the year, but the outsized returns can mostly be traced back to one event. The stock jumped 83% in a single day after it released updated clinical information related to its phase 3 study of its lead compound ITI-007 for the treatment of schizophrenia.

The data showed that the 60 mg version of ITI-007 demonstrated a statistically significant improvement in patients' Positive and Negative Syndrome Scale total score compared to those receiving placebo. Impressively, the drug did so while showing placebo-like safety.

The company looked at its huge share price jump as a great time to raise additional capital and sold enough common stock to add $345 million to its balance sheet. That capital raise gives it a massive cash position -- it currently holds more than $510 million in total cash on its books.

With a war chest of capital in hand, it also decided to initiate another phase 3 study of ITI-007, this time studying its use as a potential treatment for bipolar depression.

Now what: I think investors would be wise to continue to approach Intra-Cellular with caution going forward. While the reported data in September looked good overall, it wasn't as perfect as the market's reaction implied. While the 60 mg version of ITI-007 demonstrated statistical significance in improving patients' PANSS scores, the 40 mg version was unable to show the same results.

It's also worth remembering that ITI-007 was not a homegrown compound -- it was actually acquired in 2005 from pharma giant Bristol-Myers Squibb (NYSE:BMY) for only $1 million up front. While the terms of the deal will entitle Bristol-Myers Squibb to additional milestone payments and single-digit royalties on sales if ITI-007 finds its way to market, those figures pale in comparison to the most lofty estimates of ITI-007's potential. Sure, Bristol-Myers could have just made a mistake -- but it's possible that the company had good reason to not believe in ITI-007's future.

Intra-Cellular is slated to release additional clinical-data second phase 3 trial of ITI-007 in treating schizophrenia in the middle of the year, so it makes sense to keep this as a radar stock for the time being. If that additional data looks good, then it will go a long way toward de-risking ITI-007's future.