But while it's tempting to complain about those seemingly lackluster results, keep in mind things could have been much worse -- say, for example, if you were among those who owned and held shares of a number of fashion apparel and accessories companies from start to finish last year. To be sure, shareholders of Coach (TPR), Michael Kors (CPRI -0.36%), and Fossil Group (FOSL 0.18%) plunged 12.9%, 46.7%, and 67%, respectively, in 2015, each badly underperforming the broader market: 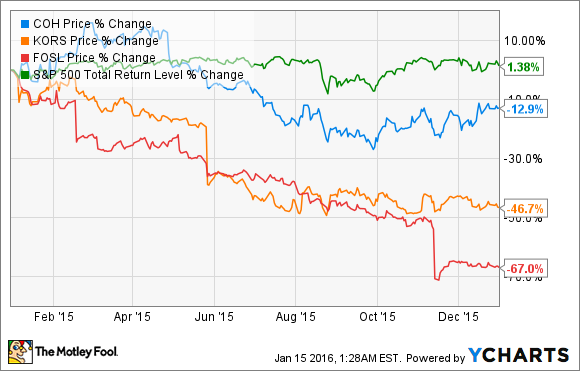 A big bet on wearable tech
Let's start with the most severe decline in Fossil, the value of which dropped by two-thirds over the course of 2015 as the watch maker served up one disappointing quarter after another. Most recently in November, Fossil reported quarterly revenue declined 14% year over year to $771.3 million, missing expectations by roughly $23 million, as declines in Fossil's multibrand licensed watch portfolio and the negative impact of foreign exchange more than offset growth from its core Fossil and Skagen brands.

To Fossil's credit, overall revenue would have fallen a much more manageable 8% had it not been for the currency headwinds -- which should ultimately prove temporary -- including an 11% currency-neutral drop from watches, a 3% increase in leather goods sales, and a similar 3% gain in jewelry revenue.

Meanwhile, though Fossil's earnings declined nearly 45% to $57.5 million, or $1.19 per share, analysts were actually expecting lower earnings of $1.13 per share. What's more, Fossi announced it would acquire wearable technology specialist Misfit for $260 million during the quarter, effectively creating opportunity to cash in as consumers' preferences shift away from its traditional bread-and-butter watch segment. In the meantime, however, Fossil also issued weak guidance, calling for fourth-quarter revenue to decline in the range of 16% to 7% from the same year-ago period, well below analysts' models calling for a narrower decline of 4.4%.

At CES earlier this month, Fossil also unveiled plans to launch more than 100 connected devices in 2016, signaling a ramped effort to capitalize on its recent acquisition and turn around the business. We should hear more about what Fossil expects to achieve financially from this effort when it reports official Q4 results next month.

A former highflier
Next, I can't say I'm entirely surprised by the continued slide of Michael Kors. In fact, after taking market share and achieving superior growth to rivals for years leading up to the middle of 2014, I went out on a limb to suggest Michael Kors stock was ready for a pullback, especially as it demonstrated the first signs of contracting margins as growth began to decelerate.

Sure enough, Michael Kors steadily dropped from its highs that year, then suffered a steep 23% single-day decline in May, 2015 after it reported weaker-than-expect 17.8% top-line growth, including 14.9% growth in retail sales. But that growth was driven entirely by net new store openings over the past year, as comparable-store sales fell 5.8%. Even on a constant-currency basis, retail net sales grew "just" 21.1% as comps decreased 1.7% that quarter, underwhelming investors in a stock many viewed as having a rich valuation given past growth.

Most recently in November, however, Michael Kors showed signs of stabilization and a light at the end of the tunnel. Top-line growth once again decelerated, this time to 7% year over year for total sales of $1.13 billion, but also came in ahead of the 2% growth investors were expecting to see. And though net income technically fell 7% on an absolute dollar basis to $193.1 million, Michael Kors ambitious share repurchase authorization helped earnings per share actually climb 1% to $1.01, well above analysts' expectations for earnings of $0.89 per share.

That said, investors should note comparable-store sales still declined 8.5% last quarter (down 3.4% on a constant-currency basis), so any growth Michael Kors is achieving at this stage is effectively owed to its continued build-out of new locations. If Michael Kors wants to impress me as an investor, it will need to prove it has what it takes to enjoy sustained, profitable growth and ultimately reverse this trend.

An iconic turnaround
As a shareholder of Coach myself for a number of years, I'll readily admit I'm partial to collecting the iconic company's solid dividend with each passing quarter (which yields 4.4% annually as of this writing) as it implements its own turnaround.

To be sure, Coach first unveiled a multiyear plan in 2014 which, to borrow the words of CEO Victor Luis, is aimed at ensuring "both brand vibrancy and healthy, long-term growth." More specifically, Coach would close dozens of underperforming retail stores, implement various operational efficiencies, realign inventory, and update its global store fleet. Of course, that plan arguably came out of the necessity, as faster-growing peers like Michael Kors increasingly shouldered their way into Coach's global turf.

Nonetheless, as Coach continued its transformation this year, investors endured a harrowing 30% pullback by September from their February 2015 peak. At the time, Luis insisted the company remains happy with the process it has made so far. After all, Coach was seeing relative success from the multi-channel launch of new creative director Stuart Vevers' inaugural collection, and its acquisition of the Stuart Weitzman footwear brand should help supplement growth for years to come.

That's not to say Coach's latest results looked great. Net sales fell 1% year over year to $1.03 billion, comps declined 9.5%, and adjusted net income per share fell 22.6%. But at this stage in its turnaround, Coach's results demonstrated continued sequential improvement from past quarters and easily outpaced Wall Street's expectations, helping explain why Coach stock has rebounded from its October lows even as Fossil and Michael Kors continued to plunge.