Please ensure Javascript is enabled for purposes of website accessibility
Log In Help Join The Motley Fool
Free Article Join Over 1 Million Premium Members And Get More In-Depth Stock Guidance and Research
By Jeremy Bowman - Jan 15, 2016 at 10:25AM

The chocolate maker grew more slowly than expected, and faced troubles in China.

What: Shares of The Hershey Company (HSY -0.19%) left a sour taste in investors' mouths last year, falling 14%, according to S&P Capital IQ data. The candy giant saw slowing revenue and profit growth as people's food preferences continue to change. As the chart below shows, the stock's fall came mostly during the first half of the year as it missed earnings estimates in its first two quarterly reports. 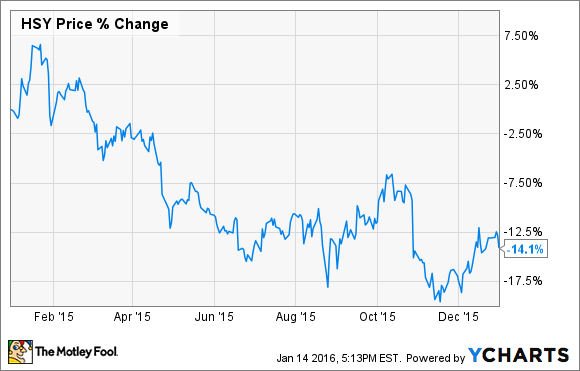 So what: After its first earnings report of the year, Hershey shares sold off 4% as the confectioner missed estimates on the top and bottom lines. It also announced the acquisition of Krave Jerky, branching into snacks, but investors were unimpressed. The company lowered it sales growth forecast to 5.5%-7.5% for 2015, but now is expected to miss that as analysts expect full-year revenue to actually be down 0.4%.

In its first-quarter report, the candy maker disappointed again, saying sales in China were weaker than expected, falling 47% in the quarter. The company also missed estimates again, and cuts its full-year revenue growth forecast to 4.5%-5.5%.

In June, the company's performance took a turn for the worse as it announced it would cut 300 jobs in response to an increasingly challenging business landscape.  China sales slowed again, and the company cut its forecast for sales and profits one more time.

Now what: The average stock might have fallen much more than 14% had it had the type of year that Hershey had, but its history and well-known brand make it more stable than most. It's a classic Buffett stock, a strong brand in a stable industry, and a profitable but slow-growing company. Even after losing 14%, Hershey isn't a bargain at a P/E of 19, but if the company can at least meet expectations, this year the stock should fare better.

Worried About Inflation? Sweeten Your Portfolio With Hershey Stock