Please ensure Javascript is enabled for purposes of website accessibility
Log In Help Join The Motley Fool
Free Article Join Over 1 Million Premium Members And Get More In-Depth Stock Guidance and Research
By Dan Caplinger - Jan 18, 2016 at 9:20AM

The paint specialist has a long history of treating shareholders well. Will it continue?

The housing market has supported a host of supporting industries, and Sherwin-Williams (SHW -3.38%) has benefited greatly from the rise in construction activity in the U.S. over the past several years. 2015 wasn't the best of years for Sherwin-Williams, however, because its overseas business struggled under the weight of the U.S. dollar's strength and weak macroeconomic conditions. As a result, share prices for both Sherwin-Williams and rival PPG Industries (PPG -0.38%) have fallen, and that has made some investors nervous about whether Sherwin-Williams will give investors a dividend increase this year. Let's look more closely at Sherwin-Williams and the likelihood of a payout hike in 2016.

Painting a pretty dividend picture
Sherwin-Williams enjoys the status of a Dividend Aristocrat, with an impressive 37-year streak of raising its dividends each and every year. The fact that the paint specialist has been able to keep its dividend rising even through past tough periods in the housing market is a testament to its resiliency and commitment to its shareholders.

Cynical investors will point out that Sherwin-Williams isn't the ideal dividend stock. Its yield is only 1.1%, falling short of even the 1.5% yield that PPG Industries pays. By the standards of most Dividend Aristocrats, Sherwin-Williams has a relatively low yield. Moreover, for much of its history, Sherwin-Williams kept that streak going with minimal half-penny per share dividend boosts, most recently from 2008 to 2011. 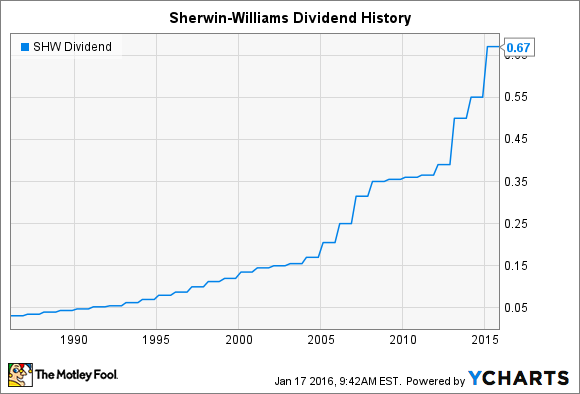 Recently, Sherwin-Williams has gotten a lot more willing to share its success with investors through larger dividend increases. The boost in early 2015 added 22% to Sherwin-Williams' payout and came on the heels of a 10% raise in 2014 and a 28% hike in 2013. Like many companies, Sherwin-Williams struggled during the financial crisis, but it has made up for lost time in the aftermath as financial conditions improved.

Fundamentally, Sherwin-Williams' business has looked solid lately. In its most recent quarter, the paint specialist posted a 15% rise in net income, despite seeing revenue stay relatively flat from year-earlier levels. The Paint Stores and Consumer groups led the way higher for Sherwin-Williams, with rising margins helping to power operating profits and the success of its HGTV Home product line adding to its popularity.

Yet Sherwin-Williams faces challenges. The Global Finishes and Latin America Coatings segments have struggled, with the latter taking a 24-percentage-point hit in sales due to the weakness of the Brazilian real and other regional currencies. Moreover, some fear a slowdown in the U.S. housing market, and that could quickly reverse some of Sherwin-Williams' recent success.

Will Sherwin-Williams keep rewarding shareholders?
One reason Sherwin-Williams has been able to build such an impressive dividend streak is that it is conservative about paying out too much of its earnings. With a payout ratio of just 25%, Sherwin-Williams would be able to sustain dividend increases even if earnings stayed flat or declined slightly. That should give income investors some comfort that the paint-maker isn't going to lose its Dividend Aristocrat status anytime soon.

Sherwin-Williams investors can expect a higher dividend in 2016, with it most likely coming in the next month or so because of the company's predilection toward making its payout increases early in the year. Even a big increase won't lift the yield too far, but Sherwin-Williams will likely share its solid profit growth with a good-sized hike in the near future.

Dan Caplinger has no position in any stocks mentioned. The Motley Fool recommends Sherwin-Williams. Try any of our Foolish newsletter services free for 30 days. We Fools may not all hold the same opinions, but we all believe that considering a diverse range of insights makes us better investors. The Motley Fool has a disclosure policy.