Please ensure Javascript is enabled for purposes of website accessibility
Log In Help Join The Motley Fool
Free Article Join Over 1 Million Premium Members And Get More In-Depth Stock Guidance and Research
By Adam Galas - Jan 19, 2016 at 8:35AM

With energy stocks crashing to unthinkable levels, find out what makes Magellan Midstream Partners so much better than two of its largest, and most popular peers.

According to Morgan Stanley, this oil crash is now the worst in over 45 years and in "uncharted territory."

Not surprisingly, energy-related names, even midstream blue chips such as Kinder Morgan (NYSE: KMI), Energy Transfer Partners (NYSE: ETP), and Magellan Midstream Partners (NYSE: MMP), have not been spared over the past 18 months. 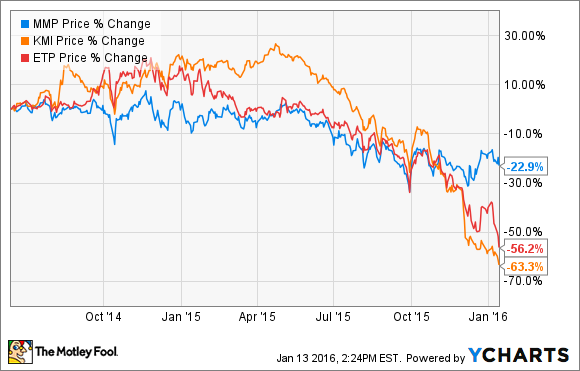 However, Magellan Midstream, while hit hard by Wall Street's energy sell-off, has held up far better than its larger peers.

That's because Magellan has three competitive advantages that make it much better suited to not just surviving, but also thriving in a world of rock-bottom oil prices.

Business model among the best in the energy sector
The key to Magellan's ability to thrive during such a severe oil crash its tollbooth business model. Not only is its distributable cash flow (DCF) secured by long-term, fixed-rate contracts, many of which guarantee a minimum volume and thus insure its revenues, but they're also written as to index inflation and allow Magellan to raise tariff fees on an annual basis.

Better yet, Magellan's midstream assets are diversified, thanks to the MLP's refined-products pipelines and marine storage business. With oil prices so low, refiner demand for such pipelines is booming and demand for oil storage is at record levels.

Add in the numerous oil pipeline projects that Magellan recently completed, including some that are poised to benefit from Congress' recent lifting of the oil export ban, and Magellan is well poised to not just continue paying a generous distribution, but also to keep growing in the years ahead.

As was just proved with Kinder Morgan's dividend cut, a massive portfolio of quality, cash flow-generating assets isn't enough to prevent a payout cut during an energy crash this severe.

Energy Transfer's sky-high yield is the market's way of warning investors that Wall Street expects that MLP to soon have to follow Kinder's lead in reducing its payout to allow Energy Transfer Partners to use excess DCF to fund its large backlog of projects and improve its highly leveraged balance sheet.

However, Magellan Midstream Partners, thanks to far more conservative management, isn't likely to face this problem. Its high levels of excess DCF can be used to reinvest into future growth, decreasing its need to tap debt markets. This is largely the reason Its balance sheet is also among the least indebted of any midstream MLP, giving it the highest credit rating that the ratings agencies will give out to the industry.

Kinder Morgan's high debt levels were a key reason it had to make the painful decision to cut its dividend and, barring a strong recovery in energy prices in 2016, is the same reason that Energy Transfer Partners' distribution is at high risk of the same.

That's because both Kinder and Energy Transfer are trading at the very bottom of the investment-grade credit scale, and thus any downgrade would force them to turn to the junk bond markets, which are increasingly unwilling to lend money except at astronomical interest rates.

Meanwhile, Magellan's low debt levels allow it to continue to borrow at some of the lowest interest rates in the industry, which means it can continue to invest selectively into only the most profitable growth projects.

Note that Magellan Midstream's returns on invested capital is much higher than its larger competitors. That's because management is careful only to approve new projects if the expected EBITDA multiple is 6-8 times or better.

Because of its smaller scale, these super-profitable projects can still move the needle and result in strong cash flow growth. This situation results in even less dependence on debt and equity markets, as well one of the industry's most sustainable distributions.

Bottom line
In this age of severe uncertainty and panic surrounding all things energy, income investors need to focus first and foremost on the highest-quality midstream MLPs.

Magellan Midstream Partners is a prime example of just such an MLP. I think all long-term dividend investors to use this once-in-a-lifetime opportunity that Wall Street is offering you to all least consider adding Magellan to your diversified long-term income portfolio. Crude prices will inevitably recover, and when they do, those with the courage and foresight to "be greedy when others were fearful" by purchasing quality on sale will likely be richly rewarded for many years to come.

Adam Galas has no position in any stocks mentioned. The Motley Fool owns shares of and recommends Kinder Morgan. The Motley Fool recommends Enterprise Products Partners and Magellan Midstream Partners. Try any of our Foolish newsletter services free for 30 days. We Fools may not all hold the same opinions, but we all believe that considering a diverse range of insights makes us better investors. The Motley Fool has a disclosure policy.