The airline and department store chain were two standouts in a volatile day for the stock market. 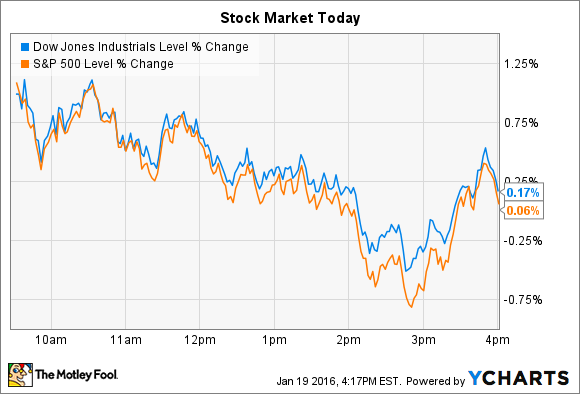 Oil prices fell again, dipping to $28 per barrel, or the lowest level since 2003. That pressured energy companies, which were some of the worst performers on the market. On the other hand, Delta Airlines (DAL -1.60%) and Macy's (M -6.66%) both outperformed the broader market with solid moves higher today.

Delta sees a bright 2016
Delta was one of the market's best-performing stocks after the airline announced fourth-quarter earnings results this morning. The headline sales and profit figures were both slightly below consensus estimates. The airline's 2% revenue decline was worse than expected, but the slump can be entirely explained by foreign currency pressures. Exchange rate swings caused what would have been a slight increase in passenger unit revenues to become a 1.6% decline.

Meanwhile, Delta's profits spiked higher as fuel costs dove. Net income soared to $1.5 billion, up 42% from the prior year. That translated into adjusted earnings of $1.18 per share, or a penny below consensus targets.

Management isn't expecting the sales environment to improve sharply in 2016, but they do see major opportunities for profit growth. "With over $3 billion in potential savings from lower fuel prices and numerous commercial, operational and cost initiatives already in place," CEO Richard Anderson said, "we expect to again perform in the top tier of the S&P Industrials on earnings growth, margins, and cash flows this year despite global economic challenges."

Anderson and his team believe operating margin will climb to 19% in the first quarter, making it likely that 2016 will mark Delta's sixth straight year of expanding profitability.

Macy's new shareholder
Macy's stock rose 3%, bringing its year-to-date gain to 11%, or well ahead of the broader market's 8% decline. Today's pop came after billionaire investor David Einhorn's hedge fund revealed that it has built up a position in the retailer.

Einhorn's Greenlight Capital thinks that at recent prices, Macy's stock might become a target to be taken private for purposes of splitting off its real estate holdings to unlock the value of those properties, which are substantial.

We know the retailer is at least exploring its options for squeezing cash out of its land as one way to counter the sting from negative comparable-store sales growth. On the same day it posted -4% comps for the holiday season, Macy's announced it has secured a real-estate focused investment bank to look into "forming partnerships or joint venture(s) for the company's mall-based properties, as well as Macy's flagship real estate assets."

Even if a spinoff doesn't happen, Einhorn thinks shares have reached a low enough valuation to make it a good investment. That could be true. At a single-digit price-to-expected-earnings ratio, down from 17 times earnings just a few months ago, it's hard to argue that Macy's shares aren't cheap right now.