Please ensure Javascript is enabled for purposes of website accessibility
Log In Help Join The Motley Fool
Free Article Join Over 1 Million Premium Members And Get More In-Depth Stock Guidance and Research
By Steve Symington - Jan 19, 2016 at 9:00AM

After a wretched 2015, here's what could drive the action-camera maker's best year yet.

Watching the market's sharply negative reaction to GoPro Inc.'s (GPRO -1.24%) freshly reduced guidance last week, it might be tempting to follow the crowd and run as far away as possible from the action-camera maker: 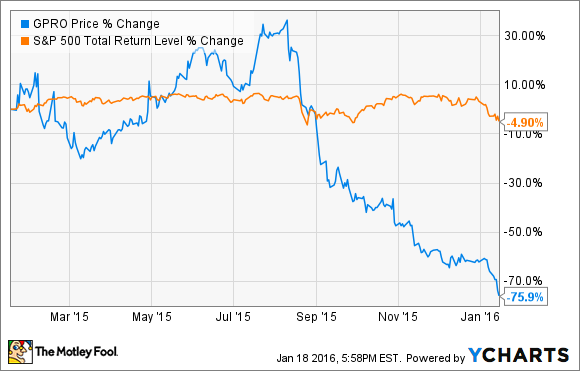 GoPro has badly under-performed the market over the past year. GPRO data by YCharts.

After all, GoPro's most recent quarterly report in October was painful enough, as it not only fell short of its own guidance for the first time since going public in June 2014, but also offered initial guidance for revenue to decline roughly 17% year over year in the crucial holiday quarter to a range of $500 million to $550 million. But even that range proved too optimistic. Blaming slower-than-expected sell-through of GoPro's capture devices -- which arguably should have come as no surprise after GoPro slashed the price of its new HERO4 Session camera for the second time since its launch in July -- GoPro now expects revenue to decline a harrowing 31.4% year over year to $435 million.

But with GoPro stock now down 75% over the past year and more than 50% off its $24-per-share IPO price as of this writing, that also creates a new dilemma for investors: Might now be the perfect time to step in? Or to be even more bold, could last year's pullback possibly be the precursor to making 2016 GoPro's best year yet?

For investors with a stomach for volatility and the patience to watch GoPro's long-term growth story unfold, I think it's possible.

A tough move, good Karma
First, however hard it might be, note GoPro is prudently reducing its workforce by 7% as it enters the seasonally slow first quarter. That'll mean biting the bullet and incurring around $5 million to $10 million in severance charges next quarter, but -- to borrow the company's words -- will also enable it "to better align resources to key growth initiatives."

In the near term, likely the most significant among those initiatives will be GoPro's new Karma quadcopter, which the company recently confirmed is still on track for launch sometime in the first half of the year.

And though some industry watchers have speculated GoPro is late to a crowded drone market already dominated by companies like China's DJI, GoPro insists Karma should offer a "unique value proposition" to this market. By leveraging its well-known brand and existing marketing and global distribution networks in support of Karma, GoPro hopes to not only win over existing drone customers, but also lure new enthusiasts to accelerate growth in this already-burgeoning industry.

Keeping in mind we still don't know exactly what that value proposition entails, I find myself agreeing nonetheless with Daugherty analyst Chris Anderson, who last year argued GoPro could quickly secure as much as 25% of the estimated $1.9 billion drone market -- resulting in sales of almost $480 million --  by the end of 2016. Even in the absence of significant year-over-year growth from its core camera products, then, Karma alone could have an immense positive impact on GoPro's ability to increase its top line from the $1.6 billion in total sales it expects to achieve for all of 2015.

Marketing and a new HERO
Next, it seems reasonable that GoPro would follow its Karma launch with a new line of HERO cameras to succeed its current top-of-the-line HERO4 models.

What remains to be seen, however, is whether GoPro chooses to replicate last year's unusual -- and badly mishandled -- second-quarter launch of the HERO4 Session, or instead follow its proven past technique of launching new products in the third quarter just in time for the 2016 holiday season.

More specifically, recall GoPro's high-end HERO4 Black and Silver models have consistently generated more than 50% of the company's total revenue and unit sales in every quarter since their launch, despite the fact that launch occurred over one year ago in September 2014. But when GoPro introduced the HERO4 Session at the same $399 price point as the physically larger -- albeit more feature-rich -- HERO4 Silver, it created consumer confusion and effectively hurt no competitor more than itself.

"What's interesting about this product is [...] it's selling against the best-selling cameras in the world, which thankfully are GoPros," explained GoPro CEO Nick Woodman. "[E]ven introducing something that's new, and convenient, and as exciting as this, it's a tough road to hoe against GoPro."

In this case, rather than releasing new products to further crowd its bread-and-butter capture device market, I think GoPro should fare much better by instead releasing replacement capture devices to improve upon -- and eventually retire -- its already popular high-end models.

It also didn't help that, in retrospect, GoPro believes it hurt demand by underfunding marketing in both the second and third quarters of 2015. As a result, GoPro resumed ramping marketing spend going into the fourth quarter, including its first return to television after a one-year hiatus. To be fair, GoPro's latest guidance reduction might be an early indication that its marketing has proven ineffective. But GoPro has also confirmed it will sustain this ramped marketing spend in 2016, which could go a long way toward cementing its brand in consumers' minds over the long term.

A banner year?
That's also not to mention GoPro's continued efforts to grow and monetize its media segment, including its Premium Content Licensing Portal launched last July, and its continued foray as a content and solutions provider for the budding virtual reality industry.

As it stands, however, GoPro's transition into both a VR content provider and digital media empire is still in its earliest stages, and this year I primarily expect to see the company laying the groundwork for media to offer more substantial top- and bottom-line contributions in future years. In the meantime, though, if GoPro can successfully execute new hardware launches, from its Karma drone to a new high-end HERO line of cameras, I think the company can stop its downward spiral and, for investors who buy at today's prices, potentially make 2016 its best year yet.

Steve Symington has no position in any stocks mentioned. The Motley Fool owns shares of and recommends GoPro. Try any of our Foolish newsletter services free for 30 days. We Fools may not all hold the same opinions, but we all believe that considering a diverse range of insights makes us better investors. The Motley Fool has a disclosure policy.